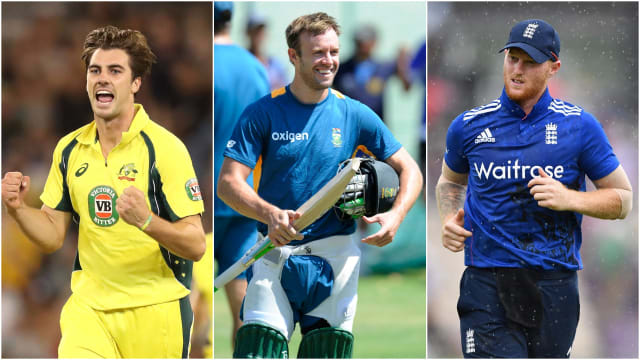 A death-bowling specialist, a brilliant but brittle speedster and the old stager with question marks over his future are among the men potentially set to light up the ICC Champions Trophy.

Batsman Shikhar Dhawan, player of the tournament in the 2013 edition, and leading wicket-taker Ravindra Jadeja helped fire India to glory on this stage four years ago.

The powerhouse holders from the subcontinent will be among the favourites again, but they are likely to face stiff competition from world champions Australia, one-day international specialists New Zealand, hosts England and South Africa, who are always dangerous in every format.

We pick five players to watch from a clutch of would-be heroes.

That quality is epitomised by Cummins, who had to wait over five years for his second appearance at Test level due to a nightmare succession of injury problems, headlined by persistent issues with stress fractures of the back.

The right-arm quick has fared better in the 50-over arena, playing 28 ODIs, all but five of them coming since November 2014.

With 51 wickets, an average of 25.54 and a strike rate of 27.7, this could be the tournament when the 24-year-old finally fulfils his considerable promise, should his body afford him the opportunity to do so.

Had a great time with @DelhiDaredevils. Lots of friendships, memories and the Delhi support was next level. Onto London for the #CT17

Following in the footsteps of Ian Botham and Andrew Flintoff, Stokes has matured into one of the world's premier all-rounders.

The 25-year-old became the most expensive overseas player in Indian Premier League history when he was purchased for £1.7million by Rising Pune Supergiant for the 2017 season.

Stokes' two ODI tons and five of his nine fifties have come since September 2016, while he took five wickets in three matches away to India in January.

With 47 scalps in 55 matches and a reasonable economy of 6.07, there's room for improvement with ball in hand and the Champions Trophy on home soil could be the perfect stage as Stokes seeks to banish memories of conceding four consecutive sixes in the concluding over of last year's World Twenty20 final defeat to West Indies.

Decent bit of willow there @BenStokes38#WIvENGpic.twitter.com/vsarrhvAJZ

One of the (relatively) new kids on the block for India, Bumrah has thrived in the shortest format, taking a record 28 T20 wickets in the 2016 calendar year.

The 23-year-old really comes into his own when the pressure is on, his distinctive slinging delivery style no barrier to producing some superb death bowling.

Bumrah, who conceded just two runs in a super-over for Mumbai Indians against Gujarat Lions in this year's IPL, already has 22 wickets from 11 ODIs, with a very tidy economy of 4.89.

Skipper Virat Kohli will be hoping this member of the next generation comes to the fore on green-tinged English wickets.

Boom, boom, Bumrah! Death overs specialist, yorker specialist, @Jaspritbumrah93 can do it all and then some. #CricketMeriJaanpic.twitter.com/bsfR1l2lXV

What is not up for debate, though, is the 33-year-old's enduring quality and threat, particularly in limited-overs cricket.

The proud owner of 24 ODI centuries and 53 fifties at 54.22, De Villiers claims to be a man on a mission in England with South Africa having fallen in the semi-finals four years ago.

"I haven't won one of these trophies in my career, so I'm pretty desperate to win one, and we'll do anything we can to get out on top," he said.

Great to have my new MRF bat in my hands.. @MRFWorldwidepic.twitter.com/kJhWbAsOng

Together with Kane Williamson, Guptill faces the unenviable task of attempting to replace Brendon McCullum for ODI specialists New Zealand.

McCullum retired in February, having previously led the Black Caps to the final of the 2015 World Cup in Australia.

At 30, Guptill is at his peak and primed to step into the void vacated by the former captain.

The proud owner of the highest individual score at an ICC Cricket World Cup (237 against West Indies in Wellington two years ago), this Champions Trophy could confirm his status as the Kiwi's new go-to man.

Looking forward to getting back in black with the @blackcapsnz for #ChampionsTrophy soon! Hopefully with no hammy issues!! #Blackcaps #Repost @blackcapsnz with @repostapp ??? Here's our squad for the ICC Champions Trophy 2017, starting on 2nd June #CT17