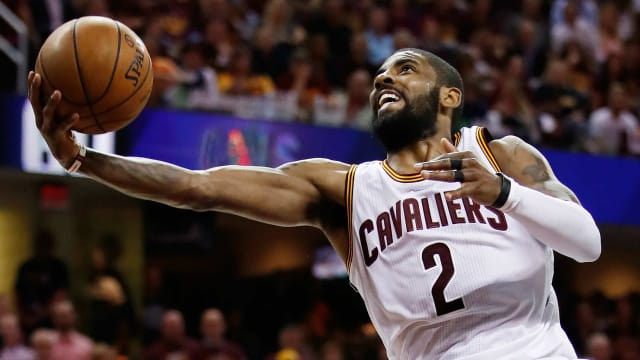 It looked like the Celtics were on their way to tying up the series at 2-2 after silencing the Quicken Loans Arena crowd in Cleveland and with LeBron James in early foul trouble.

Then Irving heated up with a game-high 42 points as the Cavaliers moved 3-1 clear in the series, leaving the Celtics on the brink of elimination.

The Celtics held a 57-47 half-time lead, but the Cavaliers came out of the break on fire.

Cleveland shot 76 perc ent from the floor in the third quarter, led by Irving's 13-for-16 shooting.

Irving scored 19 of Cleveland's final 21 points in the quarter, including a long three-pointer just before the buzzer.

James went to the bench midway through the second quarter after reserve guard Terry Rozier drew an offensive foul.

It was the first time James ever had four fouls in the first half of a game in his career. He had only been called for four fouls in a playoff game three times over the last two years.

The Cavaliers outscored the Celtics 65-42 in the second half, thanks to Irving's playoff career high in points.

James also shook off his shaky start to rebound from a 11-point display in Sunday's game-three loss. The four-time MVP finished with 34 points and did not get called for a foul in the second half.

While Irving and James were scoring, Kevin Love dominated the glass with 17 rebounds to go with 17 points.

The Cavs will look to close out the series on Thursday and return to the NBA Finals for the third straight year, where the Golden State Warriors await.