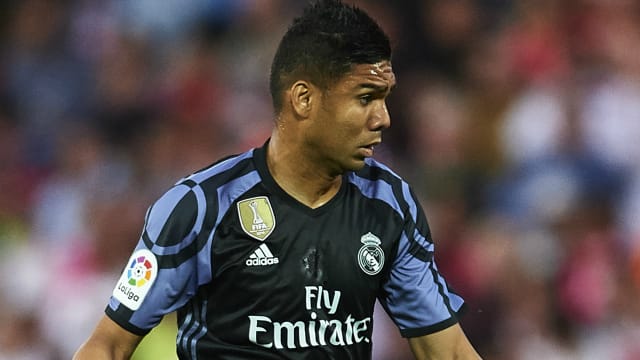 Real Madrid would be deserving LaLiga champions if they can finish the job against Malaga, according to midfielder Casemiro.

Zinedine Zidane's side are on the brink of winning their first Spanish title for five years after defeating Celta Vigo 4-1 at Balaidos on Wednesday.

Madrid travel to Malaga on Sunday knowing they only need a point to claim the league and Casemiro believes his side would be worthy winners.

"These three points have seen us take a significant step towards the LaLiga title," Casemiro told the club's website.

"Next up it is Malaga, who are strong at home and have improved a lot towards the end of the season.

"This squad deserves to take the title in LaLiga, but we will head there and will be gracious because we are aware that it will be tough."

Cristiano Ronaldo scored twice in the win over Celta and Casemiro sees his star team-mate as the Ballon d'Or frontrunner.

"With regards to Cristiano, he has performed incredibly well in LaLiga's run-in and the final stage of the Champions League," said the Brazil international.

"I think that we will have to mention his name in the same breath as the Ballon d'Or again".

Defender Marcelo, who set up Karim Benzema's goal, felt Madrid impressively tamed a motivated Celta outfit, though he urged his team-mates not to begin the celebrations until the job is done against Malaga.

"Celta were really raring to win, but we showed that we were capable of managing the game," he said.

"We remained relaxed and delivered the goods to claim an emphatic win.

"It is now time to rest up, we know that we haven't won anything yet and that there is still a game to go. We will have to give our all on Sunday."