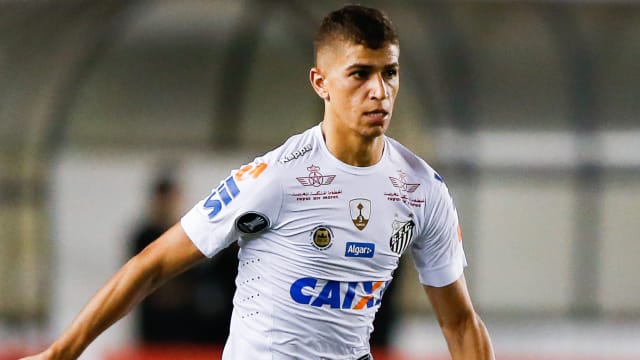 Santos booked their spot in the Copa Libertadores last 16 and were joined by fellow Brazilian side Atletico Paranaense in thrilling fashion.

Despite being held to a 1-1 draw by The Strongest, Santos advanced from Group 2 on Wednesday.

After Bruno Henrique was sent off for the Brazilian visitors, The Strongest went ahead through Alejandro Chumacero in the 40th minute.

But Santos earned a point thanks to Vitor Bueno, who tapped in a Lucas Lima cross in the 68th minute, and a missed Pablo Escobar penalty.

Santos top the group on nine points and can finish no lower than second, with The Strongest (8 points) and Santa Fe (7) to meet in their final group games.

Santa Fe recorded a 2-0 win over Sporting Cristal on Wednesday.

Atletico Paranaense advanced from Group 4 after a thrilling 3-2 win at Universidad Catolica.

Former Croatia and Arsenal forward Eduardo came off the bench to equalise for Atletico before another substitute, Douglas Coutinho, had them ahead.

But Ricardo Noir levelled for the hosts in the 85th minute, only for a third sub - Carlos Alberto - to score a winner for Atletico soon after.

Wanderson saw red for Atletico in additional time as they advanced to the knockout stages.

San Lorenzo joined them in progressing after a come-from-behind 2-1 win at home to Flamengo.

It saw the Argentine giants finish top of the group, ahead of Atletico PR but also on 10 points - one clear of Flamengo.

In Group 7, Chapecoense claimed an important 2-1 win at Lanus, boosting their chances of advancing.