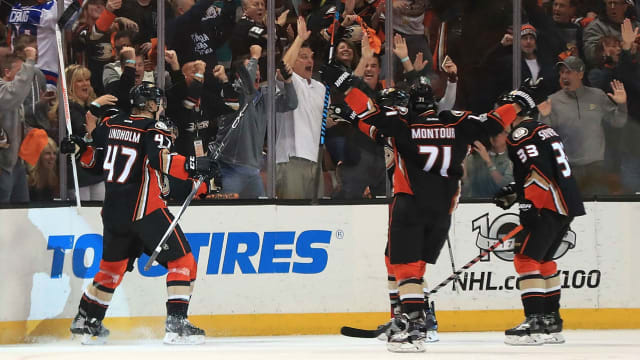 The Anaheim Ducks advanced to the Western Conference Finals with a 2-1 win over the Edmonton Oilers in the NHL playoffs.

The Ducks' last four seasons ended abruptly with a game-seven loss at home, blowing a 3-2 series lead each time.

Their fortune changed Wednesday when, trailing 1-0 to the Oilers, Anaheim took control of the game and the series to get back into the Conference Finals.

Ryan Getzlaf and Corey Perry were major reasons the Ducks were able to buckle down and edge the upstart Oilers.

The Ducks regrouped and from that point on, the Oilers managed only 11 shots.

Andrew Cogliano tied the game in the second period and Nick Ritchie gave Anaheim their first lead in a game seven in five years.

A Ritchie wrister has the @AnaheimDucks ahead in #Game7. #StanleyCuppic.twitter.com/7OeOBfXm8K

Ryan Kesler, Ducks - Kesler assisted on the game's first goal Wednesday. He has only scored once himself in the playoffs, but his best work was done in the defensive end in keeping Connor McDavid in check. The Oilers star had three goals in the series but none came in the final two games.

Nick Ritchie, Ducks - Ritchie now has three goals in the playoffs and two in the last two games of the series after scoring the game winner.

John Gibson, Ducks - Gibson was pulled after three goals on six shots in game six but responded with a 23-save performance in the second game seven of his career.