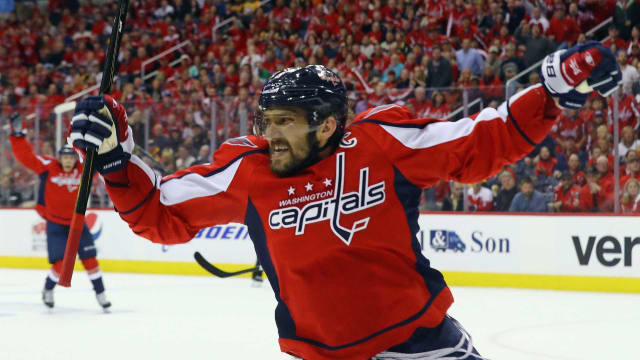 Just when it looked like the Washington Capitals were headed for another disappointing exit from the NHL Stanley Cup playoffs, they showed signs of life in a 4-2 win over the Pittsburgh Penguins.

The Capitals scored three times in the third period against reigning champions the Penguins to stave off elimination in their second-round playoff series on Saturday.

Trailing 2-1 entering the third period, the Caps got the game-tying goal from Nicklas Backstrom just 2:49 into the final stanza.

Washington now trail Pittsburgh 3-2 in the series as they look to force a game seven.

The Caps' comeback did not quite have the drama as Saturday's first game after the Ottawa Senators earned a 3-2 series lead with a 5-4 overtime victory against the New York Rangers.

Each team had goals in the third period, courtesy of New York's Jimmy Vesey and Ottawa's Derick Brassard before Kyle Turris settled the contest in OT.

Clarke MacArthur, Senators - MacArthur had two assists to go with three shots on goal and three hits in Ottawa's win. His second assist came on Brasard's game-tying goal with 1:26 remaining in the third period.

Andre Burakovsky, Capitals - Burakovsky scored Washington's first goal on Saturday and then assisted on Backstrom's tying goal in the third that sparked the rally.

Braden Holtby, Capitals - The Vezina Trophy finalist stopped 20 shots, including 12 saves in third period, to get the win for the Caps.

Turris was not going to be denied, using a second-chance shot to go five-hole on Rangers goalie Henrik Lundqvist.

Turris pots the OT winner in Game #5 and the #Sens have a 3-2 series lead. #ALLINpic.twitter.com/hOGBogx5p1

Game 6: Ducks at Oilers - What will the Anaheim Ducks do for an encore following Friday's improbable comeback? Ryan Getzlaf and Corey Perry will look to close out the Edmonton Oilers, who will have to rebound after blowing a 3-0 lead in the final four minutes only to lose 4-3 in double overtime. Connor McDavid has been fantastic, but the pressure will be on Edmonton goalie Cam Talbot, who was fantastic Friday with the exception of the three-minute segment at the end of the third period. He still made 60 saves as the Ducks pelted the Oilers netminder.