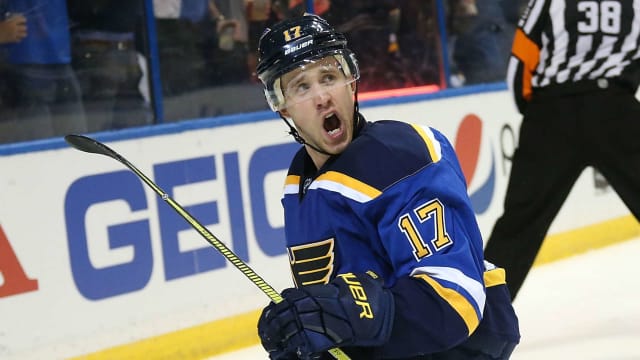 The St Louis Blues stayed alive in the NHL playoffs as the Anaheim Ducks staged a remarkable comeback.

Jaden Schwartz's goal early in the third period lifted the Blues to a 2-1 victory over the Nashville Predators in game five of their second-round Western Conference series.

The Blues staved off elimination, but will still have to win two more games to advance to the conference finals.

The Ducks produced an incredible comeback against the Edmonton Oilers to claim a 4-3 win after double overtime.

Anaheim scored three times in the final four minutes to come from 3-0 down before Corey Perry netted the winner, giving them a 3-2 series lead.

Dmitrij Jaskin, Blues - Not only did Jaskin score Friday's first goal, he had a team-high four hits as the Blues turned in perhaps their most aggressive game of the postseason.

Connor McDavid, Oilers - McDavid notched his first multi-point game of the postseason as the top pick in the 2015 NHL Draft is proving his worth in his second season. The 2017 Art Ross Trophy winner netted a goal and added an assist as Edmonton built their 3-0 lead. Edmonton's 20-year-old captain led the NHL with 100 points on 30 goals and 70 assists in the regular season and is a huge reason the Oilers are even in the playoffs.

Corey Perry, Ducks - Not only did Perry net the game-winner in double overtime, he had two assists in the win. After Ryan Getzlaf, who assisted on Perry's game-winner, got Anaheim's first goal with three minutes, 16 seconds remaining, Perry helped Cam Fowler score 35 seconds later and then had the assist on Rickard Rakell's game-tying goal with just 15 seconds left.

Perry said his goal was set up by a perfect forecheck that the Ducks had been trying to work the entire game.

Thrilling end to an amazing game.

The @AnaheimDucks take a 3-2 lead in the series. #StanleyCuppic.twitter.com/G1OpNFx4q9

Game five: Penguins at Capitals - the Capitals will try to avoid elimination at home. Capitals captain Alex Ovechkin took the blame for Wednesday's game four loss, so it will be interesting to see how the Caps respond in front of their home crowd.