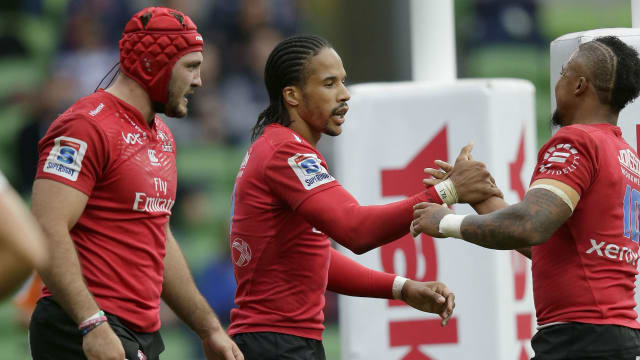 Super Rugby's top two Lions and Chiefs both claimed dominant victories as Blues staved off a second-half fightback from Waratahs.

Lions and Chiefs each won eight of their first nine matches, and easily made it nine from 10 in routs.

Melbourne Rebels, bottom of the Australian Conference, proved no match for South African group leaders Lions, who led 19-7 at the break thanks to tries from Kwagga Smith, Ross Cronje and Courtnall Skosan.

Reece Hodge pulled Rebels within nine points with a penalty after the interval, but Lions then pulled away.

Sylvian Mahuza crossed for Lions' fourth try with an 80-metre effort, before Culum Retallick was sin-binned and conceded a penalty try for intentional offside.

Anthony Volmink and Warren Whiteley added further gloss to the scoreline with the final two tries.

Reds have won just two games this season but led 12-10 midway through the first half in New Plymouth.

But the game turned when back row George Smith was sin-binned, his absence allowing Charlie Ngatai to mark his first appearance in almost 12 months after overcoming concussion symptoms with a try and help make it 20-12 at the break.

And Chiefs surged clear in the second half, Stephen Donald enjoying a superb game in place of the ill Aaron Cruden, the hosts scoring a further four tries to earn a bonus point.

Blues went in for two tries and Piers Francis kicked four penalties to give them a commanding 26-0 half-time lead against Waratahs.

Israel Folau's first tries in seven games came in the form of a second-half double, but his brace and scores from Silatolu Latu, Bernard Foley and Paddy Ryan were not enough to complete what would have been a remarkable turnaround.