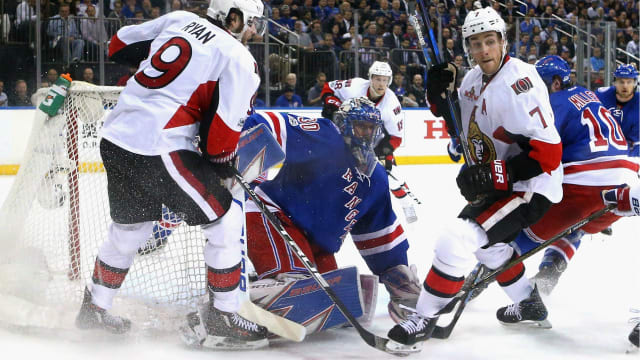 Henrik Lundqvist helped the New York Rangers to a much-needed win in the NHL playoffs, while the Nashville Predators pulled away.

Rangers goaltender Lundqvist took matters into his own hands on Tuesday, turning aside 26 of 27 shots in a 4-1 win for the Rangers against the Ottawa Senators.

Despite their win, the Rangers still trail the Senators 2-1 in their series.

Elsewhere, the Predators pulled 3-1 ahead against the St Louis Blues thanks to a 2-1 win in game four.

Mats Zuccarello, Rangers - Zuccarello has become Mr. Playoffs. His goal and assist in game three brought his postseason point total to six and give him 30 in 57 games through his career.

Pekka Rinne, Predators - The Predators are one win from their first appearance in the Western Conference finals, and Rinne's resurgence from a down season deserves much of the credit. The Preds' goalie has transformed into a brick wall in the playoffs and made 32 more saves in game four.

Ryan Ellis, Predators - Nashville have the best blue line in the playoffs and Ellis is leading the charge. He extended his point streak to seven games with a third-period goal and skated 24 minutes, 31 seconds with three shots on goal and four blocked shots. The point streak ties a Preds franchise record.

Ellis continued his fine form with what was the game's opening goal against the Blues.

Game four: Capitals at Penguins - Given recent events, it is hard to imagine Pittsburgh were one goal away from a 3-0 series lead. No one will blame the Penguins, leading 2-1 and already plagued by injury, if they deflate under Sidney Crosby's concussion diagnosis. He is out for at least game four and so is Conor Sheary. Top-line forward Patric Hornqvist, winger Carl Hagelin and defenseman Brian Dumoulin are banged up, too. There is blood in the water for the defending champions.