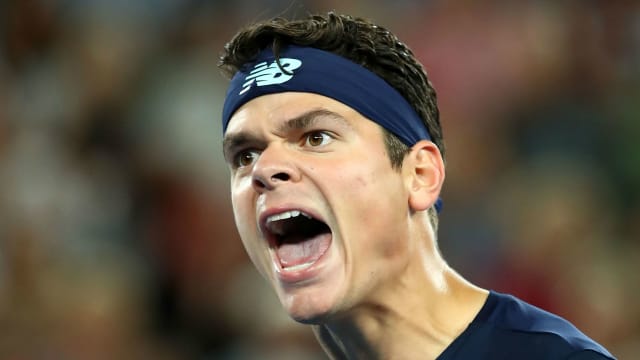 Milos Raonic got his clay-court season off to a winning start by coming from a set down to fend off the challenge of Aljaz Bedene and reach the quarter-finals of the Istanbul Open.

The world number six withdrew from the Miami Open in March due to a hamstring injury, but was back in business with a 6-7 (5-7) 6-3 7-6 (7-3) success against the improving Bedene.

Bedene was runner-up at the Hungarian Open last weekend after winning three ATP Challenger tournaments recently and the Briton threatened to pull off an upset against the top seed on Wednesday.

Last year's Wimbledon runner-up Raonic did not face a single break point in the second-round match, but was on the back foot when he went a set down after netting a regulation forehand volley in a tie-break.

The powerful Canadian responded by losing only three points on serve in the second set and breaking twice to set up a tense decider in the first meeting between the two.

Just as in the opener, neither player could force a break-point opportunity in the last set, but this time Raonic came out on top in the breaker to set up a meeting with Bernard Tomic.

Tomic got past unseeded Brazilian Rogerio Dutra Silva in straight sets, winning 73 per cent of points on his first serve and saving seven break points to win 7-5 6-3.

Marin Cilic took little over an hour to defeat Damir Dzumhur, breaking twice in each set to seal a comfortable 6-3 6-2 victory.

Cilic will now face Steve Darcis, who wrapped up 6-2 6-1 win over Jiri Vesely in only 52 minutes.