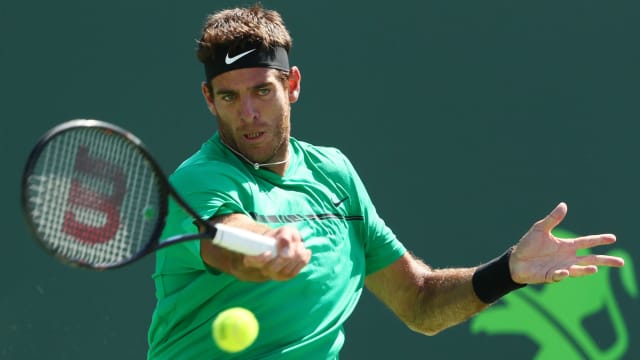 Juan Martin del Potro started his clay-court season with an emphatic victory over Yuichi Sugita in the first round of the Estoril Open, while Philipp Kohlschreiber was among the German winners in the BMW Open on home soil.

Fifth seed Del Potro hit the ground running on the red stuff, coasting to a 6-1 6-3 success over Japanese outsider Sugita in just an hour and 20 minutes.

The 2009 US Open champion served eight aces and broke six times to saunter into the last 16, with Ryan Harrison to come next.

Defending champion Nicolas Almagro also made it through at the expense of eighth seed Benoit Paire, who went down 6-3 6-2.

It was a day to forget for Joao Sousa on home soil as he was shown the exit door by Bjorn Fratangelo. Kyle Edmund was another seed to fall at the first hurdle, losing to qualifier Joao Domingues.

Mischa Zverev was another German contender to progress, battling his way past compatriot Dustin Brown 6-4 6-7 (4-7) 6-3.

Seventh seed Borna Coric was sent packing by Dusan Lajovic in the opening round of the Istanbul Open, losing 6-3 6-7 (1-7) 7-5.

Viktor Troicki only needed two sets to dump Marcos Baghdatis out 7-5 6-4 after Aljaz Bedene, Laslo Djere, Damir Dzumhur and Karen Khachanov had sealed their spots in round two.