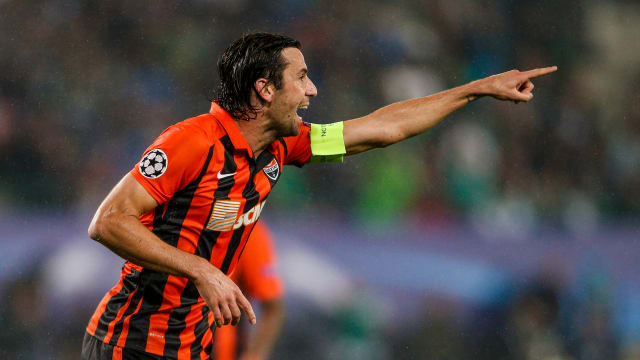 Darijo Srna has signed a contract extension with Shakhtar Donetsk, ending repeated speculation that he could move to Barcelona.

The Liga side reportedly tried to bring Srna to Camp Nou in January to solve their problem position of right-back, only for Srna to reject the transfer.

The former Croatia international - his country's most capped player with 134 appearances - has now agreed a new deal that runs to the end of the 2017/18 season and Srna signalled his intention to stay with the club for the rest of his career.

"I am very happy," Srna said after marking his 35th birthday on Monday by signing the new contract.

"I want to finish my career at Shakhtar. And when the president told me that he offered me a new contract, I only thanked him in response.

"I agreed to any terms. You probably know about the story with Barcelona, however, as I said, my heart is here. I'm happy at Shakhtar. After a 14-year spell with them, you do not consider yourself a part of the club - you become a member of the family.

"And at such a difficult time, it's hard just to give up everything. Therefore, I made my decision very quickly. When I talked to the president, I told him that I was glad to sign a new contract, and I am glad that he believes in the team and me. Therefore, I feel a great responsibility to the president, the club and the fans. I am going to give my all to the fullest."

Darijo #Srna: For three years, we have been waiting for such a moment as the coming fixture versus Zorya!https://t.co/4cKYK3DS1Epic.twitter.com/1Hln5L4zLf

Srna, who joined Shakhtar in 2003 and is the club's leading appearance-maker, is now aiming to collect his ninth league title at the club, with Shakhtar a whopping 14 points clear of Dynamo Kiev at the top of the Ukrainian Premier League.

"I told the president that I would be happier to claim the domestic league title with Shakhtar than the Champions League with Barcelona," Srna said. "He answered me that everything was clear then.

"Few people put in his shoes would have acted like him - and I just could not forgive myself if I had left. However, this is ancient history.

"We became champions in 2014 last time, so this Premier League is very important for us, and the club may secure the 10th title. I want to win it more than ever and devote it to all Shakhtar fans, as well as the club's president, as they deserve it most of all."