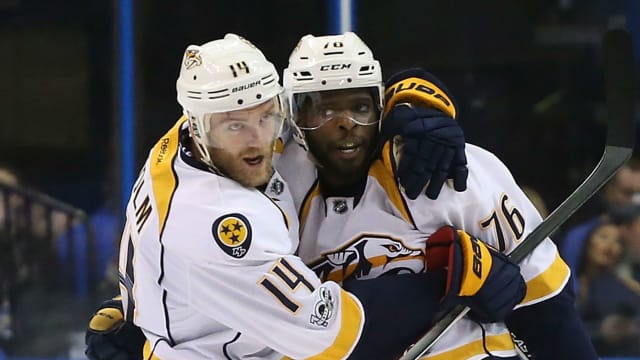 The Nashville Predators and Edmonton Oilers drew first blood in the opening games of their respect Western Conference second-round clashes.

Only one goal was needed as the Predators topped the St Louis Blues 4-3 in the NHL playoffs on Wednesday.

P.K. Subban looked every bit the dynamic defenceman whom the Predators thought might be the key beyond the second round. His goal and two assists helped Nashville take another step forward in that mission

Subban's performance reminded of his days in Montreal when he scored 38 points in 55 playoff games but never took the Canadiens to the promised land.

The Preds' first goal on Wednesday came on the power play - a theme in this one - when Subban unleashed a one-timer from the left faceoff circle that deflected off the stick of Colin Wilson. At first it looked like the goal belonged to Subban, but that came later.

Less than three minutes into the second period, Subban scored his first playoff goal as a Predator with a seeing-eye laser from the point that beat Jake Allen five-hole.

His third point of the night came later in the period when he assisted on Filip Forsberg's power-play goal to build Nashville's 3-1 lead. The Blues stormed back with a pair of third-period goals until Vernon Fiddler broke the draw, scoring the eventual game winner with 5:05 to play.

Meanwhile, the Oilers overcame the Anaheim Ducks 5-3 thanks to a four-goal third period in game one.

Colton Parayko, Blues - Not enough has been given to Parayko's postseason performance. The Blues chose to lean heavily on the 23-year-old after trading Kevin Shattenkirk at the deadline, and he has responded with quality minutes ever since. Parayko had a goal, five shots on net and was plus-three in the game-one loss.

Leon Draisaitl, Oilers - Draisaitl more than doubled his playoff scoring total with a monster four-point showing in Edmonton's win in Anaheim. He assisted on the Oilers' first three goals and added an empty-net goal for good measure, bringing his postseason tally to seven points in seven games.

P.K. Subban, Predators - Before this season, Subban's team was just 3-7 when he scored in a playoff game, a stat Habs fans know all too well. Nashville are 1-0.

Adam Larsson sure picked a good time for his first-career two-goal game. The Oilers defenseman, acquired in the other blockbuster that sent Taylor Hall to the New Jersey Devils, scored what stood as the game-winner with 4:40 remaining. Hard to believe this game was tied 1-1 to start the third period.

Game 1: Penguins at Capitals - There is much more to this series than Sidney Crosby vs. Alex Ovechkin, but who cares? It is must-watch hockey any time these two superstars renew their rivalry. Pittsburgh won their last two Cups in 2009 and 2016 while going through the Capitals, but fate might finally favour Washington after a gut-check series against Toronto in the first round. The time is now for the Caps to exorcise their black and gold demons.