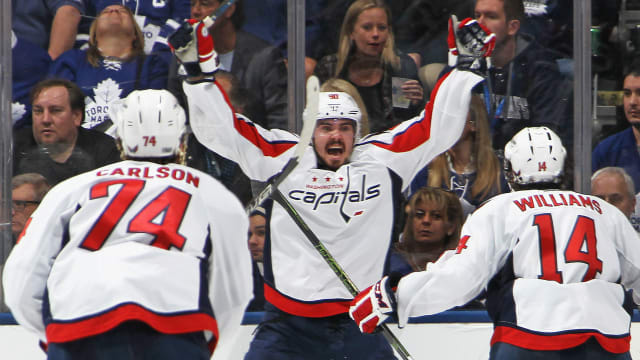 The Washington Capitals finally took care of the Toronto Maple Leafs in the NHL playoffs, while the Ottawa Senators also advanced.

After six very long, nerve-wracking games, the Capitals edged the Maple Leafs 2-1 after overtime on Sunday to complete a 4-2 series win.

Marcus Johansson's second goal of game six came six minutes, 31 seconds into the 18th overtime during the NHL's opening round - a playoff record - bringing an end to the Leafs' season that exceeded all expectations.

Five of their six games were decided in overtime, tying a record under the modern NHL playoff format.

The Senators also needed OT to overcome the Boston Bruins 3-2.

Auston Matthews, Maple Leafs - There was no shortage of fanfare surrounding Matthews from the day he went number one overall. Elimination notwithstanding, the 19-year-old delivered in his first playoffs, scoring goals in four straight games.

Marcus Johansson, Capitals - Johansson, fresh off a career-high 24 goals in the regular season, scored his first two of the playoffs at the most opportune of times. He finished the first-round series with five points in six games. As if the Caps need more firepower.

Clarke MacArthur, Senators - Three weeks ago, it was not certain whether MacArthur would play hockey again. So after two years battling concussion symptoms off the ice, it is especially fitting the 32-year-old could be the one to send the Senators to the second round with his overtime winner in game six. It was the sixth goal of his playoff career and second this year.

No doubt MacArthur's emotional return has the Sens riding high. Ottawa won a playoff series for the first time since 2013, thanks to him.

Determination will always pay off. Clarke MacArthur ends the series with an OT win. #StanleyCup#OTTvsBOSpic.twitter.com/UaNR8TFxEd