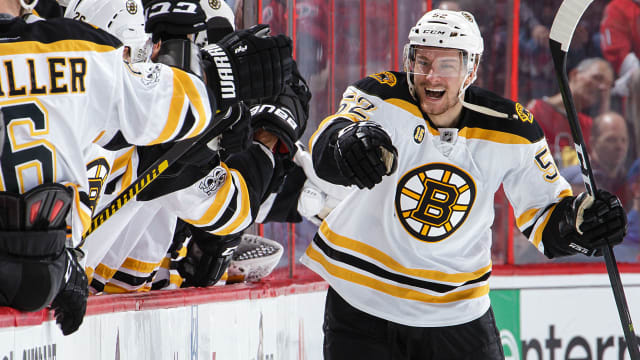 The Boston Bruins avoided elimination and the Washington Capitals took a series lead in the NHL Stanley Cup playoffs.

Sean Kuraly scored two goals, including the game winner in double OT. The rookie was scoreless in his first eight NHL games this season.

The Bruins were on the brink of elimination, down 3-1 to the Senators and when Boston fell behind 2-0 in the second period, it looked like their postseason was over.

But David Pastrnak scored the Bruins' first goal in the second period, and Kuraly tied it with his first career goal, setting the stage for his heroics in double overtime.

The Senators lead 3-2 in the best-of-seven series.

Justin Williams scored just over a minute into overtime in Washington as the Capitals trumped the Toronto Maple Leafs 2-1 in game five.

It is now advantage Washington, who lead 3-2 in the series.

Braden Holtby, Capitals - After giving up four goals in three straight games to Toronto - two of them overtime losses - Holtby shut down the Maple Leafs, turning away 24 of 25 shots in an overtime win.

Justin Williams, Capitals - The right wing knocked in the game winner against the Maple Leafs 1:04 into overtime. Williams, who scored 24 goals in 80 games this season, has three in this series.

Sean Kuraly, Bruins - The rookie will never forget this night, with his first and second NHL goals the tying and winning scores that helped the Bruins stave off elimination by the Senators in the playoffs.

After playing to a 1-1 tie in regulation, the Capitals made scoring look easy in overtime. Marcus Johansson finds Justin Williams in the slot for the game winner, the fourth game of this series decided in overtime. Washington carries a 3-2 series lead into Game 6 Sunday in Toronto.

Game 6: Canadiens at Rangers - The New York Rangers obviously want to end this now, rather than cross the border and play in the Bell Centre, where the enthusiastic fans - not to mention all those banners hanging from the rafters reminding everyone of past Montreal Canadiens' greatness - make it one of the toughest road games in hockey. Especially in the Stanley Cup playoffs.