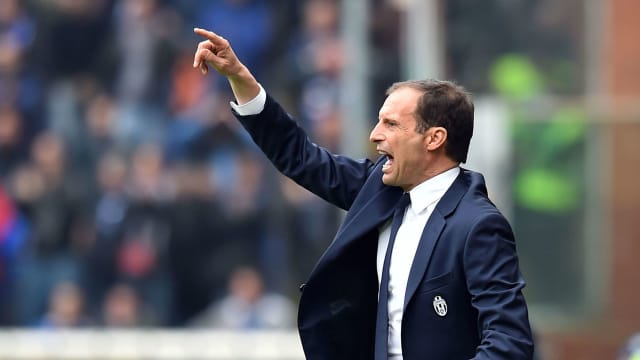 Massimiliano Allegri believes Juventus' home match against Genoa will be a decisive fixture in the race to win the Serie A title.

Juve are in pole position, having established an eight-point lead from nearest rivals Roma with just six matches remaining, while they have kept four clean sheets in a row in all competitions.

Allegri's men booked a Champions League semi-final against Monaco by knocking out Barcelona 3-0 on aggregate at Camp Nou in midweek, but the Italian remains fully focused on securing a sixth straight Scudetto for Juve.

"Getting three points against Genoa would give us an important cushion at the top, basically allowing us to get two games wrong," said Allegri.

"From Friday onwards, we'll be playing every three days, so the points are fundamental. The Scudetto is going to be decided.

@OfficialAllegri: "Our greatest strength is the togetherness of the group. We're all pulling in the same direction." #JuveGenoapic.twitter.com/MWFXDnPrMz

"We have made a journey, both as a team and a club. The important thing is to face matches with humility and the right spirit, so I want to remind everyone that Juventus have not actually won anything yet. Let's limit the euphoria here. Enthusiasm helps you train better, but with euphoria you can slip up.

"Everyone is just waiting for Juventus to fall down, but [Sunday] is decisive for the league title and we need a tough performance."

Allegri will not be resting his star names against Genoa as Juve hunt down a historic treble, with a place in the Coppa Italia final against Lazio having already been secured.

"The usual four [Gonzalo Higuain, Paulo Dybala, Juan Cuadrado and Mario Mandzukic] will start in attack," added Allegri. "The only doubt is Cuadrado, because we have to see what condition he's in. His understudy is Mario Lemina. For the defence, everyone is so good that there isn't an issue.

"Claudio Marchisio is fine now and he will play. He was unavailable in Barcelona after a knock to the calf and I didn't want to risk having a player on the bench who could not play."

Juve have been paired with Monaco in the semi-finals of the Champions League and Allegri confirmed he was happy to avoid a clash with Real Madrid, who were drawn against Atletico Madrid in the last four of the tournament.

"I would not have preferred Real Madrid in the draw," he said. "Monaco reached the semi-final and to achieve that they clearly have quality.

"They have young talents, maybe not the history of Juventus, but it certainly won't be easy for us. The objective is to reach the final in Cardiff and win the Champions League, but we can only think about that after the Serie A game with Atalanta."

The official result of the #UCLdraw!

Who will reach the final? pic.twitter.com/ctmsrrB8ip

Allegri also reiterated his intention to stay at the club amid continued reports linking him with a switch to Arsenal to succeed Arsene Wenger at the end of the season.

"The priority is not my contract, as I have a contract with Juventus and I'm very happy here. The priority remains finishing this season with trophies," the 49-year-old explained. "The most important thing is to see this season through to the end."