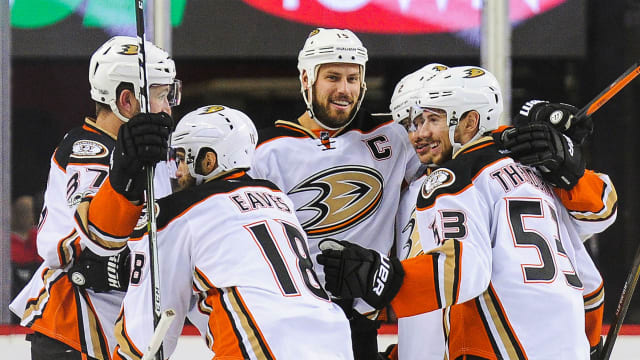 The Anaheim Ducks completed a series sweep over the Calgary Flames, as the Washington Capitals drew level with the Toronto Maple Leafs.

Anaheim asserted their claim to the top with a 3-1 win in game four to progress from their opening-round Western Conference playoff tie on Wednesday.

Patrick Eaves, Nate Thompson and Ryan Getzlaf scored for the Ducks, who swept a best-of-seven series for the fifth time in their history as they await either the Edmonton Oilers or the San Jose Sharks in the second round.

The Capitals prevailed 5-4 against the Maple Leafs to level their series at 2-2.

Washington raced out to a 4-1 lead in the opening period before Toronto rallied late on home ice but the Capitals held on in game four.

The Minnesota Wild needed a headstand from Devan Dubnyk to blank the St Louis Blues 2-0 and stave off elimination until at least game five.

The Ottawa Senators beat the Boston Bruins 1-0 for a 3-1 series lead.

T.J. Oshie, Capitals - Washington's top line was their best line, accounting for three goals in a critical victory in game four to pull even with the Maple Leafs. Oshie was credited with two of them - his first of the playoffs - including the one that stood as the game-winner when Toronto made things interesting in the final minute. Honourable mentions for line-mates Alex Ovechkin and Nicklas Backstrom for coming up big.

Craig Anderson, Senators -  Anderson's 22-save shutout in game four has Ottawa one win from their first trip to the second round since 2013. What is more, the Bruins have never come back from down 3-1 to win a series (0-22 all time). It was the fourth doughnut of Anderson's playoff career and the veteran improved to 9-2 with a .928 save percentage in his last 11 games overall against Boston.

Devan Dubnyk, Wild - Dubnyk is hardly to blame for Minnesota's first-round hole. He made 28 saves in game four to singlehandedly keep the Wild's season alive, logging the second shutout of his playoff career.

Erik Karlsson, the Senators' do-it-all defenceman, should win the Norris Trophy this year as the NHL's best blueliner. He has certainly been at his best in the playoffs and made another magician-like pass to Bobby Ryan to set up the only goal of Ottawa's game-four victory.

Game 4: Blackhawks at Predators -  It has been difficult through the years to define Blackhawks-Predators as a division rivalry, considering Chicago's domination on the head-to-head playoff ledger. This time, though, Nashville are in command and would achieve some serious payback if they deal the Western Conference's top seed an embarrassing first-round sweep.