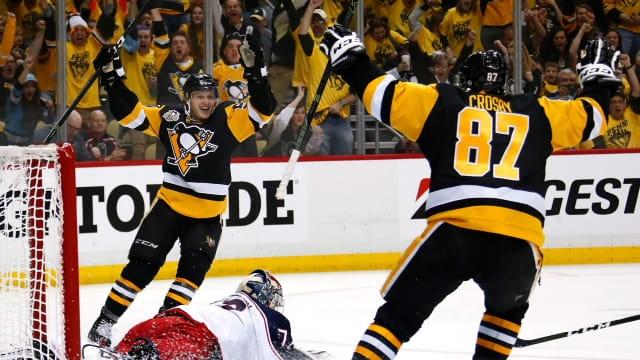 Jake Guentzel scored a hat-trick as defending champions the Pittsburgh Penguins topped the Columbus Blue Jackets in overtime of their NHL playoff series.

Guentzel's three-goal haul included the game-winning goal with 6:51 to play in OT of Sunday's 5-4 win in game three on Sunday, which has the Penguins one win from a series sweep in the Eastern Conference after rallying back from a three-goal deficit.

The third goal, a result of deft manoeuvring by Sidney Crosby behind Columbus' net, was Guentzel's fourth of the playoffs and his 13th since February turned to March, dating to the regular season.

He is the second rookie in NHL postseason history to complete a hat-trick in overtime, joining Gerry Plamondon of the 1949 Montreal Canadiens.

The Edmonton Oilers lead their best-of-seven series 2-1 against the San Jose Sharks after winning game three 1-0.

Elsewhere, the Montreal Canadians overcame the New York Rangers 3-1, while the Minnesota Wild lost to the St Louis Blues by the same scoreline.

Alexander Radulov, Canadiens - The Russian import not so quietly has been Montreal's most effective offensive playmaker during critical games down the stretch. Now in his first NHL playoffs since 2012, Radulov leads the Habs with five points in three games. His one-handed dangle in the third period of game three is an early contender for goal of the postseason.

Jake Allen, Blues - The long-hyped goalie stumbled through a large portion of his first season in the starter's crease full time, but he has turned it on lately. Allen limited the Wild to one goal for a third straight game, adding 40 saves to a whopping 114 on 117 shots faced thus far. The Blues, outshot 117-79 and one-for-nine on the power play, have not trailed and own a 3-0 series lead almost solely because of Allen's efforts.

Jake Guentzel, Penguins - There is not much left to say about the Penguins' stud rookie, except he has impeccable timing. Guentzel did not have a game-winning goal during the regular season. He now has two in the playoffs after back-to-back clutch performances.

Blue Jackets rookie defenseman Zach Werenski was not able to play in overtime because his eye had become so severely swollen he was unable to see. Werenski was bloodied when a puck struck him in the face in the second period. He did manage to return for a brief stint in the third period, but his absence hurt the Blue Jackets.

Game three: Blackhawks at Predators - It is easy to focus on Chicago's sudden inability to score in 120 minutes to open the playoffs, armed with the likes of Patrick Kane, Jonathan Toews and more. After all, Predators goalie Pekka Rinne and his two assists would lead all Blackhawks scorers. But Rinne has been sensational in net, stopping all 59 shots sent his way. If he does it again Nashville will have a chance to sweep the Western Conference's top team in a major upset.