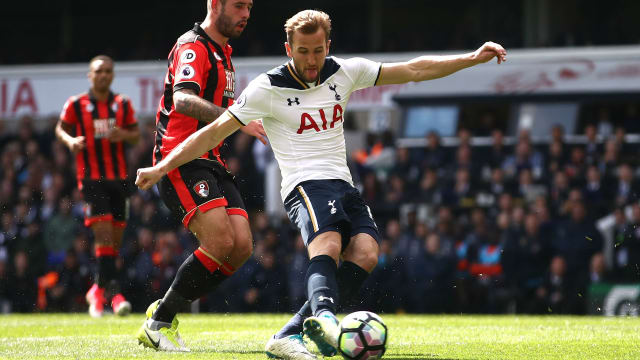 Tottenham completed a run of seven consecutive top-flight victories for the first time in 50 years by beating Bournemouth 4-0 at White Hart Lane.

Mauricio Pochettino's side put on a consummate attacking performance as they bettered their 2015-16 points total and equalled the record winning streak set by the likes of Jimmy Greaves, Terry Venables and Dave Mackay in the Spurs team of 1967.

The victory, which came courtesy of first-half goals from Mousa Dembele and Son Heung-min and second-half strikes by Harry Kane and Vincent Janssen, moved Spurs within four points of Premier League leaders Chelsea, who travel to Manchester United on Sunday.

Dembele had not scored since January 2016 but he hit the net with aplomb after 16 minutes, before Kane's flick set up Son to double Spurs' lead, and the England striker scored his 20th league goal of the season early in the second half.

Janssen then rounded off the win in stoppage time.

Defeat left Bournemouth and their leaky defence in danger of being dragged back into the relegation scrap, while Spurs maintained the imperious form that is forcing their London rivals to keep looking over their shoulder in the title run-in.

@HKane picking out the bottom corner for our third. #COYSpic.twitter.com/9F4lU1Oj26

Kane was caught offside when an early chance fell to him at close range after six minutes, before Kyle Walker broke to tee up Dembele, whose sweetly struck low drive from outside the box was well saved by Artur Boruc.

The Bournemouth goalkeeper was helpless to prevent Dembele from scoring his first goal of the season three minutes later, when Christian Eriksen's corner was allowed to bounce through the box and the Belgian rattled the ball through Boruc's legs and into the far corner of the net.

The visitors barely had time to react before Jack Wilshere's loose ball fell to Harry Kane and the striker played a neat back-heeled pass into the path of Son, who burst into the box and nutmegged Boruc for his 19th goal of the season.

Spurs' football was fluent and their attacking incessant, rendering Bournemouth virtual spectators in a first half that would have ended with the hosts three goals to the good had Eriksen aimed a little lower when he lashed a shot over the bar five minutes before the break.

The second half was two minutes old when Kane collected Dele Alli's cross and shook off Simon Francis before firing the ball low into the corner of the net from the middle of the penalty area, taking his goal tally for the season to 25 in all competitions.

Tottenham's football was worthy of their best run of form in half a century, and Kane played a neat one-two with Son before curling a shot that lacked the power to beat Boruc.

Bournemouth finally managed a shot on target in the 74th minute but Harry Arter's attempt failed to trouble Hugo Lloris, before Ben Davies' dipping low drive forced a good save by Boruc.

Son was full of running right into the final stages and his endeavour deserved a second and Tottenham's fourth when he broke down the right, but his shot hit the side-netting.

Spurs did make the result more emphatic in injury time when a well-worked short corner reached Janssen at the near post and he beat Boruc at the second attempt to score his first Premier League goal from open play.