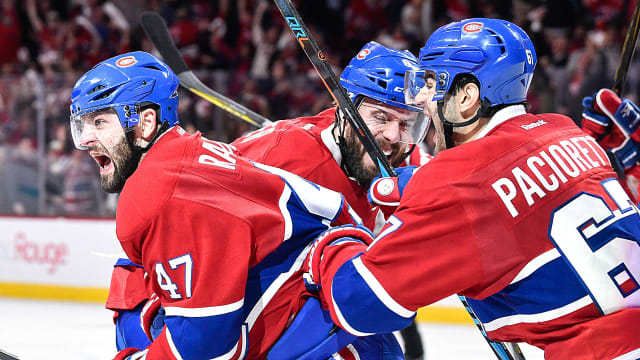 The Montreal Canadiens levelled their NHL playoff series against the New York Rangers despite Henrik Lundqvist's heroics on Friday.

Lundqvist made 54 saves for the Rangers, but Canadiens winger Alexander Radulov beat the 35-year-old goaltender in overtime to give Montreal a 4-3 victory and even the first-round playoff series at a game apiece.

Also up 2-0 in their series are the Pittsburgh Penguins, as the defending Stanley Cup champions were again dominant in a 4-1 win over the Columbus Blue Jackets.

The Edmonton Oilers levelled their series against the San Jose Sharks courtesy of a 2-0 victory.

Alexander Radulov, Canadiens - Radulov assisted on the goal that sent Friday's game to overtime before scoring the game-winner in the extra period to avoid a 2-0 series hole. It was Radulov's first career overtime goal in the postseason and his first career three-point playoff game.

Sidney Crosby, Penguins - The Pittsburgh captain had a goal and two assists as the Penguins continued to look impressive against Columbus. Crosby scored the game's first goal and then assisted on goals by Jake Guentzel in the second and Evgeni Malkin in the third.

Jake Allen, Blues - He did not need to make 51 saves like he did in game one, but Allen was again stellar in net for the Blues. He had 23 saves and survived a late flurry in the final minute after the Wild pulled their goalie.

Radulov was in the right place at the right time to knock home the game-winner against the Rangers.

The @CanadiensMTL and @RADUL22 are just a perfect fit. #StanleyCuppic.twitter.com/1JntXFuQgR

Game two: Predators at Blackhawks - After stealing game one at United Center, the Predators will look to go 2-0 up. Pekka Rinne was brilliant in the 1-0 series opener. The goalie had 29 saves as Nashville defensemen did a remarkable job on Chicago's scorers.