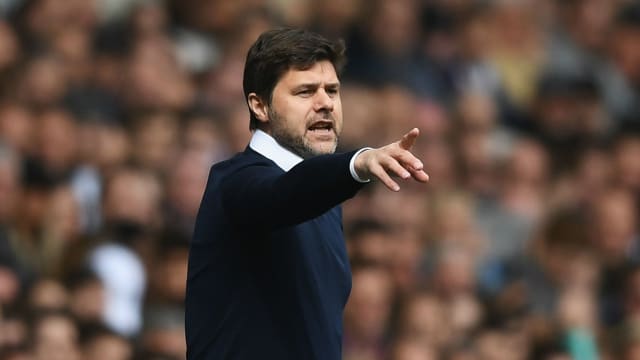 Mauricio Pochettino cranked up the pressure on Premier League leaders Chelsea as he sent out a warning ahead of their trip to Manchester United, declaring: "If they fail, we are there".

Tottenham were convincing 4-0 winners over Bournemouth on Saturday to make it seven top-flight victories on the spin for the first time in 50 years.

That resounding result at White Hart Lane - sealed by goals from Mousa Dembele, Son Heung-min, Harry Kane and Vincent Janssen - cut the gap at the summit to four points, with Antonio Conte taking his side to Manchester United on Sunday.

And Spurs boss Pochettino was delighted his men did their bit to keep the title race alive.

"Our job was to get the three points," he said. "Now if they fail we are there.

"The pressure is on Chelsea to win at Old Trafford and [that] will be very tough for them.

"It will be fantastic if [after that game] the gap is still four points.

"Four points is still a lot. They are the favourites and they are on the top. We are fighting for ourselves and to be there and play for the top four.

"For the second consecutive season we are there and it's fantastic for the club."

Mauricio: "I'm very pleased. The performance was fantastic. I'm very happy for the players and the fans." pic.twitter.com/KpLiILUen6

Bournemouth manager Eddie Howe admitted his side were short of their best against Tottenham and warned that the Cherries could still get dragged into a relegation battle.

Without a win in their last four games, Bournemouth were just seven points clear of the drop zone after the defeat and Howe criticised their failure to deal with set-pieces.

He told BBC Sport: "The performance was not great if I'm being honest, which is summed up by the quality of the goals we conceded. We conceded two from corners which was a hammer blow considering they didn't even hit the corner well.

"Overall I am disappointed with our defensive display. Technically, Spurs are a very good team, but the stand-out thing is how hard they work. They limit your possession and we half-anticipated that, but to try and stop them would have left gaps in our defence.

"I don't have too many problems about possession stats - it's the lack of pressure from our end that I want to look at.

"We know in the last five games, we will have to be better. It's my job to make everyone realise it's not over - we aren't safe yet and we have five more games that are winnable."