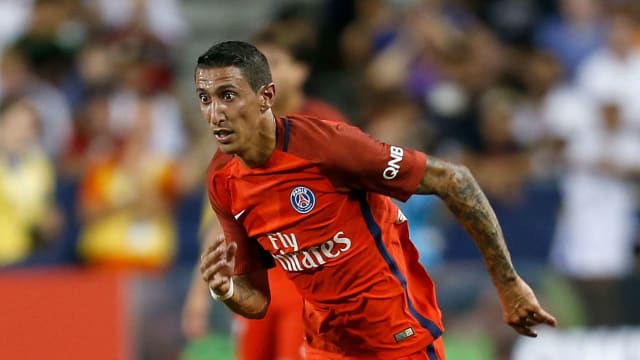 Paris Saint-Germain moved level on points with Monaco at the top of Ligue 1 after Angel Di Maria's double secured a hard-fought 2-0 win at Angers.

Di Maria's 12th goal of the season in all competitions arrived through a majestic free-kick in the first half and he sealed the points with six minutes remaining.

Angers were left to reflect upon having nothing to show for pushing a title-chaser hard for the second time in as many weeks.

Monaco left the Stade Raymond Kopa with a 1-0 win thanks to Radamel Falcao last Saturday and home boss Stephane Moulin was entitled to be aggrieved as key decisions went against his side on this occasion.

Javier Pastore - making only his eighth league start of another injury ravaged campaign - was fortunate to be awarded the foul from which Di Maria opened the scoring, while Cheikh Ndoye had an equaliser disallowed.

Recalled Angers forward Nicolas Pepe had PSG goalkeeper Kevin Trapp at full stretch to tip a lofted attempt from the edge of the area over, while Di Maria fired an audacious dipping volley beyond the crossbar at the other end.

In the 28th minute it appeared that earlier strike merely served for the Argentina star to get his bearings, as he stepped up to curl a magnificent free-kick past Alexandre Letellier from 30 yards after countryman Pastore theatrically won a foul from Angers defender Romain Thomas.

PSG needed a goal and Angel Di Maria answered the call with a gem of a free kick! 1-0 Paris lead over Angers! #SCOPSG pic.twitter.com/K3cDfPGWJp

The hosts were not discouraged and continued to perform brightly - Vincent Manceau forcing Marquinhos into a brave block inside the box and Trapp grasping Baptiste Santamaria's shot at the second attempt.

Angers thought they were level in the 39th minute but Famara Diedhiou was penalised for a foul on Serge Aurier, even though both players seemed guilty of grappling, before captain Ndoye converted Karl Toko Ekambi's knockdown.

Edinson Cavani brilliantly brought down Pastore's wonderful chipped pass before the break but lashed wide with a 30th Ligue 1 goal of the season in his sights.

Diedhiou ignored Ndoye in space to smash over seven minutes into the second period, while the Angers striker was a touch fortunate to only be booked for a two-footed challenge on Blaise Matuidi.

Trapp was relieved to gather Thomas Mangani's deflected effort as the hour passed and the wall did its job from the same player's free-kick on the edge of the box following Adrien Rabiot's careless handball.

A flagging PSG did not fully clear that 72nd-minute danger and Trapp saved acrobatically when Ndoye got on the end of Toko Ekambi's left-wing cross.

Emery bolstered the midfield with veteran Thiago Motta during the closing stages as the visitors braced themselves to grimly hang on but another substitute, Lucas Moura, cut in-field and slid through a measured pass for Di Maria to catch out Letellier at his near post and place the pressure on Monaco.