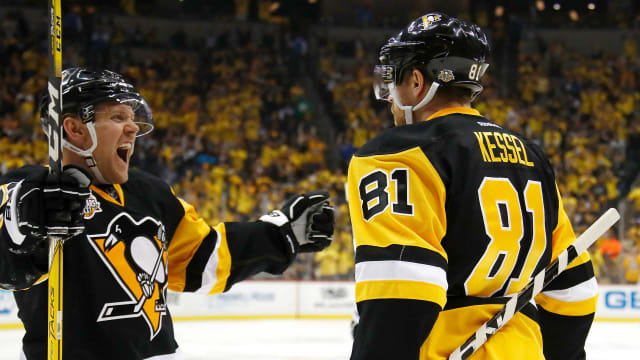 Phil Kessel scored and added an assist as the Pittsburgh Penguins began the Stanley Cup playoffs in impressive fashion in a 3-1 win over the Columbus Blue Jackets to take a 1-0 series lead.

All three Penguins goals came in the second period, beginning with Kessel setting up Bryan Rust's wrister just one minute and 15 seconds into the period.

Kessel found the back of the net two-and-a-half minutes later before Nick Bonino gave the Penguins a 3-0 lead.

Matt Calvert helped Columbus avoid the shutout as Marc-Andre Fleury, who was not supposed to start for the Penguins, stopped 31 shots. Fleury was only in net because starting goalie Matt Murray was injured during pre-game warm-ups.

The Wild dominated most of the game, but still trailed 1-0 until Zach Parise's goal with 22.7 seconds remaining in the third period forced overtime.

There was also an overtime victory for the San Jose Sharks as they defeated the Edmonton Oilers 3-2 with Melker Karlsson collecting the game-winner three minutes and 22 seconds into the extra period.

Henrik Lundqvist, Rangers - Lundqvist had 31 saves as the New York Rangers opened the playoffs with a 2-0 win over the Montreal Canadiens. It was the 10th career postseason shutout for Lundqvist, who now has 56 wins in the Stanley Cup playoffs.

Marc-Edouard Vlasic, Sharks - Vlasic had a pair of assists, including on the game-winner to help the Sharks rally from an early 2-0 deficit to take a 1-0 series lead on the Oilers.

Jake Allen, Blues - Allen was the sole reason the Blues were even in Wednesday's game against the Wild. Minnesota dominated the game, but Allen had 51 saves as the Blues were outshot 52-26. "We always rely on him and, 50-some saves, that's pretty impressive," Edmundson told NBC Sports following the game.

Brad Marchand's goal with 2:33 remaining in the third period was the deciding goal in Boston Bruins' 2-1 win over the Ottawa Senators.

Game 1: Maple Leafs at Capitals - Is this the year the Washington Capitals finally get over the hump? The Presidents' Trophy winners begin their Stanley Cup quest against the upset-minded Toronto Maple Leafs. Toronto goalie Frederik Andersen will have to stand on his head for the Leafs to have any hope against a potent Capitals offense led by Alex Ovechkin.