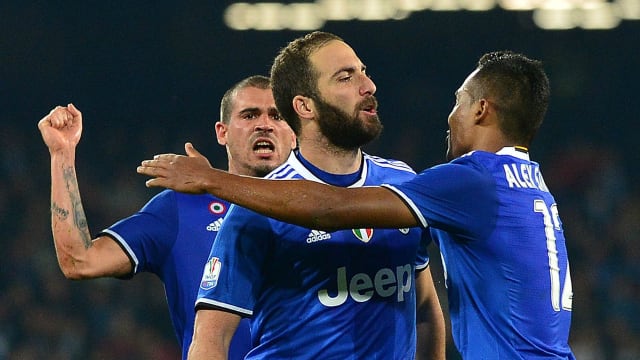 Gonzalo Higuain says it was "special" to return to Stadio San Paolo for the first time after leaving Napoli for Juventus.

The forward, who joined Juve for EUR90 million in July 2016, breaking the Italian transfer record in the process, endured a difficult game in a 1-1 draw at Napoli in Serie A last weekend.

Higuain did not record a single touch in the opposition box in that match, but he struck twice against his former club on Wednesday to send Juve through to the Coppa Italia final despite a 3-2 defeat in Naples.

After ending a run of five games in all competitions with a goal at his old stomping ground, Higuain then scored twice as the Turin giants moved a step closer to a sixth straight Scudetto with a 2-0 home win against Chievo on Saturday.

Reflecting on making his first appearances at the San Paolo since leaving, Higuain told Mediaset Premium: "It was a special return for me.

"I am happy for the Juve fans, as they are behind me and leave me in peace. I am happy here.

"It was a difficult game and we knew it was going to be - as Chievo are tough - but we won and that's what we wanted."

Juventus remain on track for the treble and they face Barcelona in the first leg of their Champions League quarter-final on Tuesday, which Higuain knows will be a stern tes..

"Now we can focus on Barcelona and rest so we can reach that game in top condition," added Higuain, who has hit 21 Serie A goals this season.

"We must be calm, as it's a very hard match against a great team, but we respect them just as they respect us."