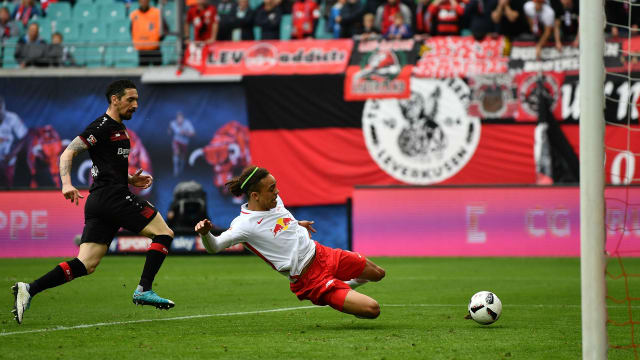 Ralph Hasenhuttl's men might have thought about hanging on for a draw after captain Willi Orban was sent off in the 88th minute but the irrepressible Emil Forsberg and Poulsen had other ideas as they prized a stubborn Leverkusen rearguard apart.

The win moves Leipzig to within seven points of Bayern Munich at the summit, placing a modicum of pressure upon the champions as they prepare to face rivals Borussia Dortmund in Saturday's late kick-off.

Forsberg was typically at the heart of much of the hosts' best work at the Red Bull Arena and he fired narrowly wide from Oliver Burke's 27th-minute lay-off, although Stefan Ilsanker was a touch fortunate not to be penalised when Leverkusen winger Julian Brandt played the ball against his arm in the area.

In the second period, Timo Werner took a poor touch to drive himself wide to the right when collecting Forsberg's excellent throughball but he recovered to fire a dangerous strike across Bernd Leno and wide.

The recently capped Germany forward was less impressive as he skied the ball over when clean through in the 68th minute and Orban's second booking for a foul on Kevin Volland added to Leipzig frustrations, before Forsberg stole into the box and centred for the outstretched Poulsen to prod home his first club goal since September via the inside of the post.