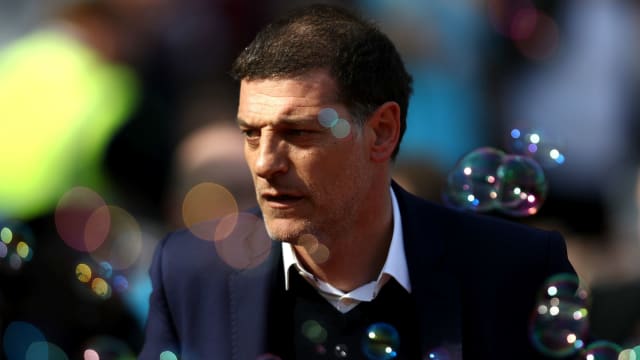 Slaven Bilic is relieved that his West Ham side appear to have pulled clear of the Premier League relegation scrap with a 1-0 win over third-bottom Swansea City.

Five consecutive defeats had threatened to drag the Hammers into the battle at the bottom, but Cheikhou Kouyate's strike brought that run to an end with a vital three points at London Stadium on Saturday.

And Bilic is now determined that West Ham - eight points clear of the bottom three with six games left - must not let their standards slip again after a "huge win".

"It is a huge win and I congratulate the boys," he told BBC Sport. "We were solid and we were dangerous. We deserved to win. Maybe we could have scored another goal to make it a little easier for us.

"It was much-needed. There was big pressure - not on me, but the players. The crowd recognised that and they were behind us.

This is what victory meant to the boss.

"It's my job, but there's a bigger picture about the club. We are the ones to blame for being in this position. I was celebrating for the players, because they have been with me and they deserve it.

"Now we need four more points as soon as possible [to get to 40 points]. We were out of the relegation battle six games ago and we are out of it again. We don't want to be in it again."

Visiting manager Paul Clement was disappointed with Swansea's performance, a result that leaves them still two points behind fourth-bottom Hull City, who were defeated at Manchester City.

"It's a very poor result for us," he said. "We didn't deserve anything more than what we got. In the first half we were full of anxiety and fear. It affected our ability to do the basics.

"We made changes in the second half to be more positive, but we lost our identity and shape. It was a scrappy, poor game of football.

It's all over. Not the result we wanted. #WHUSWApic.twitter.com/rC8KUXLNpd

"Both teams are struggling. It's a big result for them and they won't care about how they performed. It's not a good afternoon for us."

However, he insisted that Swansea are still battling, with a long way to go in the relegation battle.

"The only positive we can take is that not much has changed around us," he added. "Hull lost at Manchester City. It's still tight with a lot of football to be played."