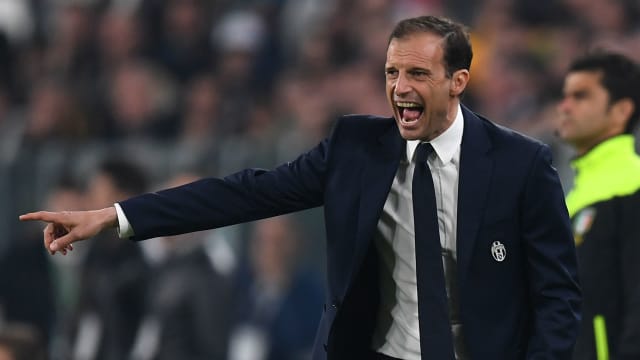 Massimiliano Allegri is determined to ensure his Juventus side are ready and full of belief as they face Barcelona in the Champions League after returning to winning ways in Serie A.

Two draws in four matches had seen top-of-the-table Juve looking over their shoulders at Roma ahead of facing Chievo on Saturday, but a Gonzalo Higuain double ensured Allegri's men can switch their focus to European action with a healthy lead of nine points at the league summit.

Juve host Barca in the quarter-final first leg on Tuesday and, although the Spanish giants were beaten at Malaga on Saturday, Allegri believes his side must play a perfect game to progress.

"We have to believe we can go through," the Juve coach told Mediaset Premium. "[The defeat at Malaga] is irrelevant, because Barcelona are accustomed to playing [big European games].

"We were coming off a couple of tough games [against Chievo] and it was only natural we'd be a little tired, so in my view this was one of our toughest games of the season, as we had used up so much energy with [two clashes with] Napoli.

"We are in good shape. Higuain did good work on his fitness levels while on international duty. We have to face the next few weeks with enthusiasm and the desire to go all the way.

"There's no point sitting here, thinking we're playing against Barcelona - we have to play and that is all. From [Sunday], we think about Barcelona, but only because it's the next game - the next game is always the most important.

"When you have Leo Messi, Neymar, Luis Suarez and Andres Iniesta, not to mention the others, it's rare you get an off night. We have to be on point, ready to attack at the right time and defend when it's necessary."

After ending a five-match scoring drought in Serie A, Higuain is looking forward to a tough test against Barca, where he believes there is a mutual respect between the two sides.

"Now we can focus on Barcelona and rest so we can reach that game in top condition," he told Mediaset Premium.

"We must be calm as it's a very hard match against a great team, but we respect them just as they respect us."