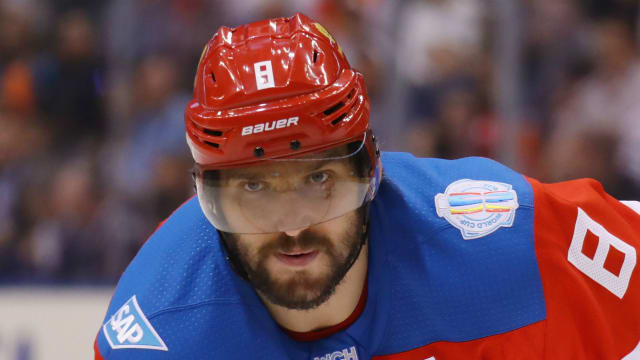 Washington Capitals star Alex Ovechkin and other NHL players are bullish on playing at the 2018 Winter Olympics regardless of the league's official stance.

The NHL announced on Monday there would be no break during the 2017-18 campaign to accommodate for the Games in Pyeongchang.

Ovechkin, speaking to reporters for the first time since Monday's announcement, said the league's official stance on the matter has not and will not affect his decision to play for Russia next February, as he has since his first Games as a 20-year-old in 2006.

"Yeah, I didn't change my mind and I won't," the Capitals star said on Tuesday, via the Washington Post.

"Because it's my country. I think everybody wants to play there. It's the biggest opportunity in your life to play in the Olympic Games. So, I don't know, somebody [is] going to tell me 'don't go,' I don't care, I just go."

The NHL's decision brought on strongly worded statements from a number of players and other aggrieved parties in the last 24 hours.

The NHL Players Association, for one, called the move "shortsighted" and condemned the league for a perceived disrespect of its players' wishes.

The International Olympic Committee, having refused to give in to NHL demands on issues such as covering players' injury insurance, said it "feels very sorry for the athletes".

Some of Ovechkin's team-mates, like fellow Russian forward Evgeni Kuznetsov, echoed their captain's sentiment in saying they would play regardless.

"For some reason, for me, I still think it's going to happen," American T.J. Oshie told reporters.

In the case of the Capitals, they would seem to have the backing of owner Ted Leonsis.

Though disappointed in and critical of the league's stance, Toews said he would not disobey its wishes and play in the Games anyway.

"I guess you have to respect your employers, your owner's decision. But ... it just seems unfortunate that when the players voice something that they think is beneficial not only for them, but for the league and for our game as a whole, it automatically turns into a negotiation," Toews said, via the Chicago Tribune. "It just seems like it comes down to what can they get out of us when the next CBA negotiation rolls around. It's not about the long-term goals of our game and growing it and the bigger picture."

Connor McDavid, the Edmonton Oilers wunderkind who was primed to star in his first Games for Team Canada in 2018, called the decision "disappointing" since the Olympics were "something I looked forward to as a kid." But asked if he would play anyway, he said bluntly, "I'm in no position to make a statement like that."