Navas was excellent against Sanchez - Guardiola 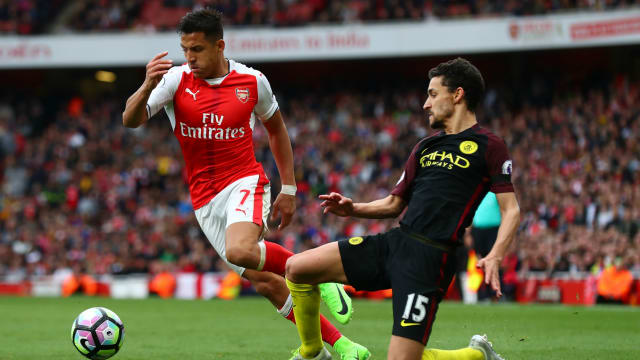 Manchester City boss Pep Guardiola has defended Jesus Navas in the wake of Sunday's 2-2 draw with Arsenal at Emirates Stadium.

Guardiola somewhat surprisingly opted to field Navas at right-back rather than in attack and the 31-year-old endured a difficult afternoon against Alexis Sanchez.

Navas received his fair share of criticism on social media following his underwhelming performance, but Guardiola feels his compatriot put in an "excellent" showing.

"I want to congratulate Jesus, who was excellent against one of the best players in the world in Sanchez," Guardiola told reporters.

"I played him because Bacary Sagna was injured and Pablo Zabaleta was not ready.

"Jesus always deserves the best because he is an excellent guy and I was so happy with him."

"We had the chances to win" said @JNavas in his post-match CityTV reaction.

City missed a chance to close the gap on Chelsea to nine points following the league leaders' defeat against Crystal Palace on Saturday, but Guardiola is not ready to give up on catching Antonio Conte's men ahead of a trip to Stamford Bridge on Wednesday.

"It was not the perfect performance but there are still a lot of games left," he added.

"Chelsea lost Saturday and it was disappointing not to take all three points."