It was a great feeling - Schweinsteiger thrilled with debut goal 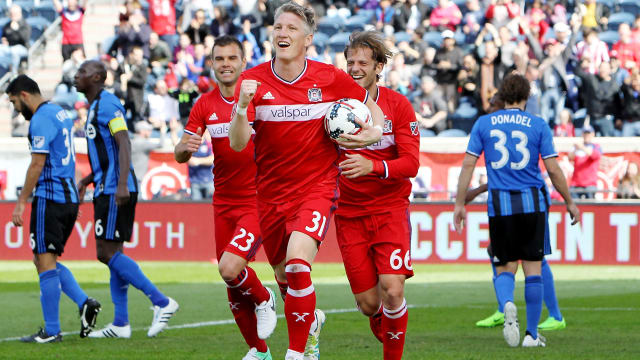 Chicago Fire star Bastian Schweinsteiger revelled in his goalscoring MLS debut, but was disappointed his team were held to a draw.

Schweinsteiger took just 17 minutes to open his MLS account, heading in a David Accam cross in Fire's 2-2 draw with Montreal Impact on Saturday.

The former Germany international and Manchester United midfielder was delighted with his goal, yet wanted more than a point out of the clash at Toyota Park.

"It was a great feeling," Schweinsteiger said.

"Perfect cross off David, header, it was a good feeling, but I'm a little bit sad, not so happy, that we couldn't win the game."

The moment @ChicagoFire were hoping for. #cf97#CHIvMTLpic.twitter.com/NqSKJjcwci

Both teams were reduced to 10 men and Fire needed a 93rd-minute goal from substitute Luis Solignac to earn their draw.

Schweinsteiger played 90 minutes despite his lack of recent game time, having struggled for opportunities under Jose Mourinho at United.

"It's not easy. I came here I think four, five days ago so, but it was OK, I was actually prepared," the 32-year-old said.

"The training session here was very good, so I will definitely also work on my fitness and to have more power, to put more energy into the game, but I'm actually satisfied.

"It was OK, but everyone can improve."