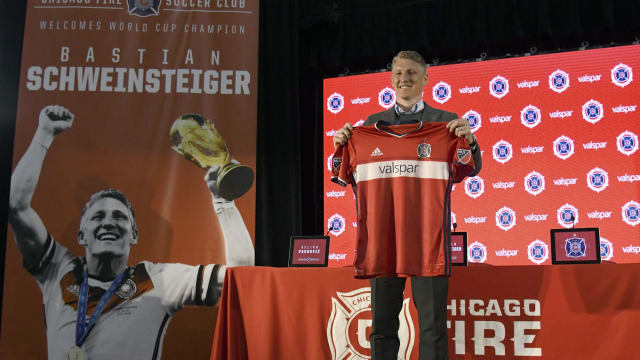 Dallas Mavericks star Dirk Nowitzki has welcomed Bastian Schweinsteiger to the United States, poking further fun at the journalist who asked Chicago Fire's new signing if they could win the World Cup.

Schweinsteiger was introduced as a Fire player on Wednesday, but one member of the assembled media caused hilarity as he asked the 32-year-old if he can help Chicago to World Cup glory.

With this question causing a stir, Nowitzki sent his best wishes to his compatriot - who won the World Cup with Germany in 2014 - jokingly urging him to repeat the feat with the Fire.

"Hey Schweini, welcome to the US - proud of you to make that move," Nowitzki said in a video posted on the Fire's Twitter account. "Hope everything goes well in Chicago and good luck winning the World Cup.

Hey @BSchweinsteiger, your friend @swish41 sent us a special message before your first match in Chicago! #cf97pic.twitter.com/hbEAow6YzC