Dybala and Mandzukic doubts for Juventus' trip to Napoli 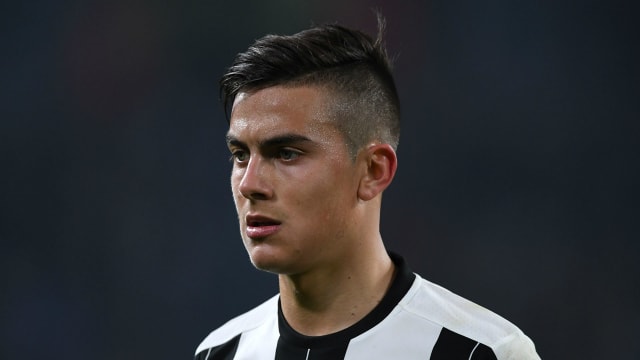 Juventus forwards Paulo Dybala and Mario Mandzukic are doubts for the top-of-the-table Serie A clash against Napoli on Sunday.

Dybala suffered a thigh injury in Juve's final game before the international break - a 1-0 win at Sampdoria - but still joined up with Argentina's squad.

He did not feature for Edgardo Bauza's national team and was an unused substitute despite Lionel Messi's suspension for the 2-0 loss in Bolivia.

The 23-year-old, a reported close-season transfer target for Barcelona, is still not up to speed after returning to Turin and only trained for part of Friday's session alongside his team-mates.

Croatia striker Mandzukic was forced to train separately, having missed his country's 3-0 friendly defeat in Estonia - a match where Juve winger Marko Pjaca suffered a season-ending knee ligament injury - due to knee inflammation.

"Mandzukic worked separately, Dybala partly with the team and partly not," Allegri explained at his pre-match news conference, where leaders Juve will aim to extend a 10-point advantage over Napoli in third.

"Dybala did a few workouts but is not in optimum condition. I'll have to evaluate and decide.

"If Dybala doesn't play, the others are ready to do well.

"Mandzukic has a problem with an inflamed knee, today [Saturday] I will consider.

"I have not yet chosen [the line-up]; after training I will have much clearer ideas."

@OfficialAllegri: "My very best wishes to @marko_pjaca20. He has been desperately unlucky with injuries." #FinoAllaFinepic.twitter.com/nnbNsbnjsh

If the duo fail to make it to Stadio San Paolo, it will place greater onus on Gonzalo Higuain, who will return to Napoli for the first time since a controversial big-money switch to the Serie A champions last year.

Winner of the Capocannoniere last term thanks to a record-breaking 36-goal haul in Napoli's famous light blue, Higuain has 19 Serie A goals this time around - including the winner in a 2-1 victory when the teams met at Juventus Stadium in October.

The second leg of the Coppa Italia semi-final, where Juventus hold a 3-1 advantage after their top scorer was once again on target, follows in Naples on Wednesday, and Corriere dello Sport reported the visitors have hired extra bodyguards for their team hotel in anticipation of a hostile reception for Higuain.

There has also been the far-less sinister sight of novelty toilet paper sold on the streets of Naples bearing Higuain's face, and Allegri is keen for an often venomous north-south rivalry not to boil over.

"Higuain made a sporting choice and he must be respected for it," he said. "He is focused and has trained well.

"In Italy, we focus so much on controversy and do not highlight the good things. Too often we overlook the positives of the game here in favour of drama and scandal.

"It is a big test of our credentials and will prepare us for the final push towards the end of the season.

"Beating Napoli would mean taking a huge step towards the Serie A title."