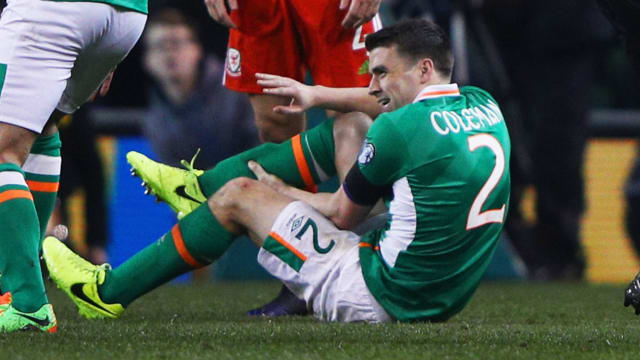 Seamus Coleman is ready to leave hospital after surgery on his broken leg was deemed a success, Republic of Ireland manager Martin O'Neill confirmed after Tuesday's 1-0 friendly loss at home to Iceland.

A first-half Hordur Bjorgvin Magnusson free-kick proved to be the only goal of the game, with Ireland unable to work visiting goalkeeper Ogmundur Kristinsson despite mounting plenty of pressure on the Iceland goal.

Ireland saw their 15-game unbeaten run at the Aviva Stadium end but it was the health of captain Coleman, whose leg was broken by a Neil Taylor tackle in a 0-0 World Cup qualifying draw against Wales, that was O'Neill's top concern.

"Seamus Coleman is doing much better," O'Neill told reporters. "I saw him earlier. He's in better spirits and has his family around him.

"It's very positive. He's due to be released from hospital tomorrow. I believe the President of Ireland visited him."

A flat Ireland display saw four players make their first international appearances and of the quartet of debutants it was Preston North End winger Daryl Horgan who particularly shone in a lively cameo from the bench.

"I thought Horgan did really well when he came on," O'Neill said. "Robbie Brady also dealt with everything very well this evening as captain.

"First half we didn't do well at all. In the second half we had loads of possession but we need to create more chances."

What a moment for Daryl Horgan! #COYBIGpic.twitter.com/gb2DphbJgD

James McClean agreed with O'Neill's assessment that creativity was lacking for his side at the Aviva Stadium and the Ireland winger revealed the manager had issued a dressing down to the team at the interval.

"It was a frustrating game to be a part of because for one reason or another we were flat," McClean said. "Look, we just need to pick ourselves up and get going again.

"We weren't good enough first half and needed a kick up the backside. We got that at half-time and we tried to put things right. The second half was a bit better but we still didn't create much and know we can do a lot better.

"Sometimes you can get isolated [up front] and you go hunting for the ball. Overall, we are disappointed but like I said, it is not the end of the world. We will pick ourselves up and go again.

"There are positives, when you look at the start we have made to the World Cup qualifying campaign and the fact a few lads got their first taste of international football. They are pluses. Tonight was disappointing but we will pick ourselves up and we will go again."