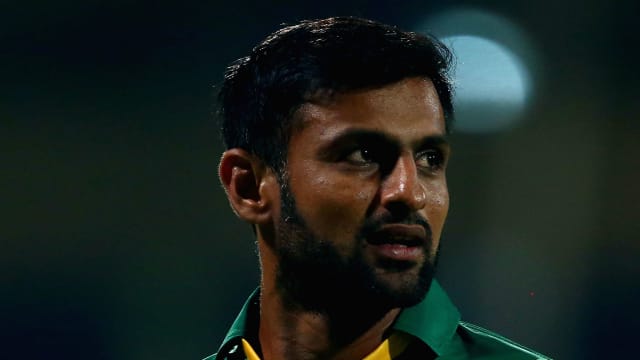 Teenage spinner Shadab Khan starred in a dream Pakistan debut as West Indies slumped to a six-wicket defeat in the first game of the Twenty20 international series at the Kensington Oval.

Shadab was given his chance after impressing for Islamabad United in the Pakistan Super League and the 18-year-old claimed remarkable figures of 3-7 from his four overs in Barbados on Sunday.

Captain Carlos Brathwaite smashed 34 not out from only 27 balls, steering the Windies from 49-6 to 111-8 from their 20 overs, but that was never going to be enough.

Pakistan whitewashed West Indies 3-0 in the United Arab Emirates in the shortest format six months ago and eased into the lead in the four-match series, with Shoaib Malik making an unbeaten 38 from 29 deliveries to get the tourists home with 17 balls to spare.

Shadab Khan's economy-rate of 1.75 is the lowest for a debutant in T20Is (minimum two overs)

Evin Lewis (10) hit Mohammad Hafeez into the stands over midwicket in the second over as Pakistan opened with spin at both ends after winning the toss, but a superb direct hit from Ahmed Shehzad ran him out three balls later.

Marlon Samuels (7) was somewhat unfortunate to be given out leg before to Imad Wasim before Shadab announced himself on the international stage with a first over he will never forget.

The leg-spinner trapped Chadwick Walton (18) lbw with his second ball and struck again to remove the returning Lendl Simmons, who played on when attempting a sweep, for one.

He had three wickets in eight balls after Sunil Narine (1) holed out and debutant Rovman Powell also fell cheaply for five, so the Windies needed some lusty blows from all-rounder Brathwaite to reach three figures.

Kamran Akmal, making his first international appearance for almost three years as a specialist batsman, hit a quick 22 at the top order but failed to go on.

Jason Holder took 2-27, including the wicket of Babar Azam (29 off 30), and Brathwaite took a steepling catch off his own bowling to remove Mohammad Hafeez (5), but was clattered into by wicketkeeper Walton in the process.

Shoaib guided Pakistan to victory, launching Braithwaite over midwicket for six and hitting another three boundaries in a comfortable win for the tourists.