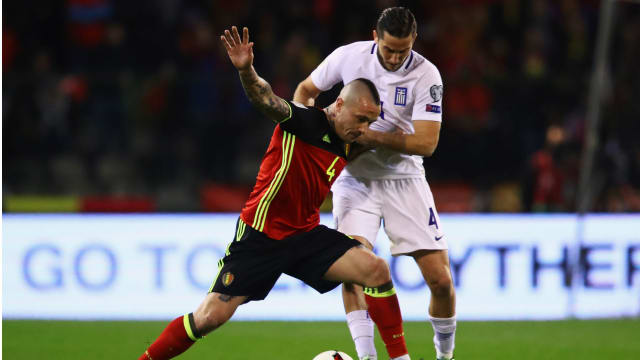 Kostas Manolas believes Roma team-mate Radja Nainggolan must make a move to a top club in order to fulfil his potential.

Belgium midfielder Nainggolan has caught the eye this season with some dazzling individual performances, as Roma aim to secure a spot in next season's Champions League.

Nainggolan's form has reportedly attracted some of Europe's top clubs - with Premier League leaders Chelsea having expressed a desire to sign the 28-year-old.

And though Nainggolan previously denied interest in a move to England - preferring the weather and lifestyle in the Italian capital - Greece defender Manolas feels the Belgium international must now take the next step in his career.

"Nainggolan doesn't like the rain, but he is among the best midfielders in the world and has to get accustomed to that too if he wants to play in the best teams," Manolas told Mediaset Premium.

"He can do it, because he's a phenomenon.

"Let's be honest, [Roma] are not up to the standard of Barcelona, Bayern Munich and Real Madrid."

Nainggolan has not been the only Roma player to catch the eye in recent seasons, with Manolas, who joined the Serie A side from Olympiacos in 2014, often linked with a move away from the Stadio Olimpico

"My future is in Roma's hands," Manolas added.