Spain are not unbeatable - Buffon rallies Italy after 1000th game 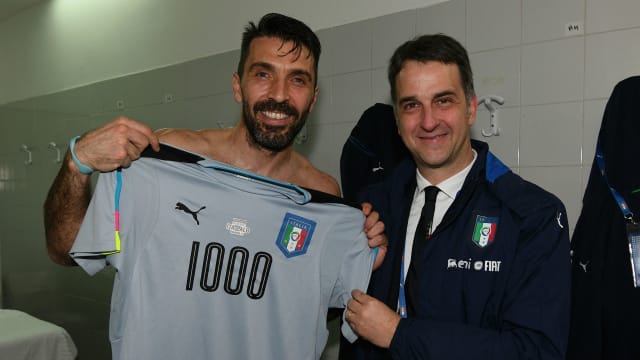 Italy goalkeeper Gianluigi Buffon has Spain in his sights after bringing up a career milestone in the 2-0 World Cup qualifying win over Albania.

Daniele De Rossi and Ciro Immobile were on target in the Group G clash as the veteran Buffon brought up his 1000th career appearance, leaving the Azzurri level on points with the 2010 world champions at the summit.

A 4-1 win for Spain over Israel means their goal difference outstrips Italy's by eight and, after the sides shared a 1-1 draw in Turin last October, the battle for top spot seems set to hinge upon September's return clash.

Italy halted Spain's European title defence with a 2-0 win in Paris last year and Buffon sees no reason why his team-mates cannot prevail once more.

"With Spain, we know we are not favourites but all teams are beatable," he told TMW Radio.

"If we play with belief, the way we did after conceding a goal against Spain in Turin and the way we did in the Euros then we can give them headaches.

"In these games, an incident can go for or against you. The important thing is to believe we can achieve something great.

| Here it is! 1,000 appearances for club and country for our captain Gigi #Buffon! #G1G1000#ItalyAlbania ?pic.twitter.com/YhGmDRxhu1

Play was suspended for nine minutes in Palermo after some of the travelling supporters threw fireworks on to the pitch.

"It was a real shame," Buffon added. "There were moments of sporting unity and fair play throughout but, as often happens, there was a small group of people who don't like fair play and find the worst way to draw attention to themselves."