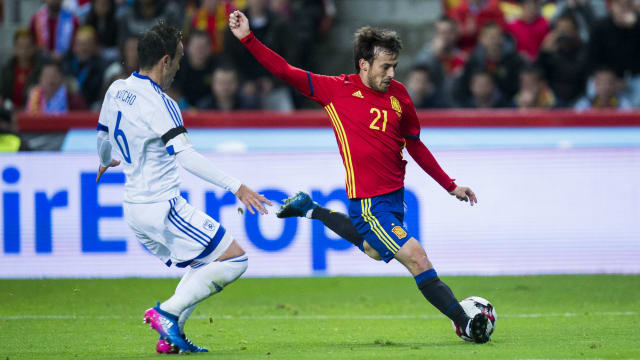 Spain had little difficulty maintaining their unbeaten start to World Cup qualifying in Group G as they cruised to a 4-1 win over Israel in Gijon thanks to goals from David Silva, Vitolo, Diego Costa and Isco.

Julen Lopetegui's men did not have it all their own way and Israel did pose an attacking threat on occasion on Friday, but in the end Spain simply had too much for the visitors and recorded a comfortable win to remain top of the group on 13 points.

Thiago Alcantara's early effort which was kept out by the crossbar served as a warning to Israel, but it did not take Spain much longer to make their mark - Silva scoring his 29th international goal to move level with Fernando Hierro as their fourth-highest scorer.

Although Spain controlled much of the second half, they had to rely on the heroics of David De Gea to keep the lead in the 43rd minute, with Vitolo then grabbing the hosts' second just a few moments later to continue his strong goal-scoring start to the campaign.

Spain appeared rather more focused after the interval and looked bent on blowing Israel away, as Diego Costa headed in their third goal and Silva went desperately close to adding a fourth when hitting the post.

Lior Refaelov hammered in for Israel with a little over 15 minutes left, but there never looked to be any danger of Spain being made to rue that Silva chance and they wrapped things up with a fourth courtesy of Isco late on.

4 - @VitoloMachin is now the Spanish top scorer in this World Cup Qualifier. Surpass

Proceedings got off to a breathless start at El Molinon, with both sides showing plenty of attacking intent, though Spain unsurprisingly went close first.

Thiago found space 25 yards from goal and produced a ferocious effort which came back off the crossbar, with Vitolo then heading the rebound over.

Israel did not get so lucky in the 13th minute, though. Jordi Alba passed through Elazar Dasa's legs to Silva, who drilled a left-footed effort under goalkeeper Ofir Marciano.

Spain allowed the tempo to drop and they were almost punished for that just before the break, as De Gea brilliantly kept out Refaelov's header to spare the hosts.

That proved to be the wake-up call Spain needed and on the stroke of half-time they doubled their lead.

Thiago fed Vitolo into the right side of the area and his shot squirmed under the right hand of Marciano before trickling over the line.

Costa missed a glorious chance to give Spain a three-goal lead just after the restart, heading Dani Carvajal's pinpoint cross wide despite being unchallenged.

But he made no mistake in the 51st minute, nodding Thiago's corner in from close range.

A fluid move almost brought another goal just before the hour mark, but Silva slammed an emphatic half-volley on to the upright after Costa cleverly knocked down a Carvajal cross into his path.

Israel pulled one back through Refaelov's powerful strike 14 minutes from the end, but it was nothing more than a consolation as Isco - a second-half substitute for Andres Iniesta - finished them off on the break right at the end, coolly finding the bottom-left corner from just inside the area.