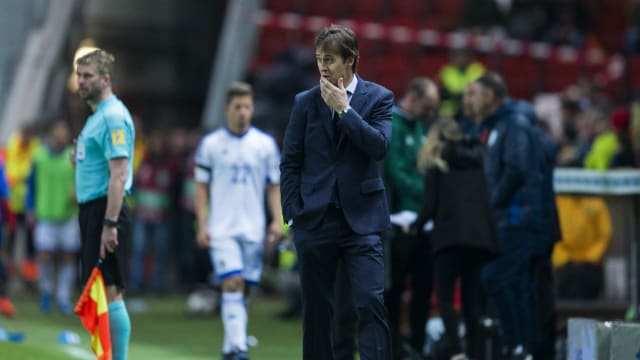 Julen Lopetegui was impressed that Spain were able to so convincingly overcome an Israel side which he believes can "scare any team".

Israel caused Spain problems during Friday's World Cup qualifier, particularly in the first half, but the home side ultimately ran out 4-1 winners in Gijon to remain top of Group G ahead of Italy on goal difference.

Spain were unsurprisingly favourites before the match, but Israel went into the fixture on the back of three successive wins in Group G, contributing to Lopetegui's belief that they are a team who pose a threat.

"We are satisfied by the three points and for having clearly outperformed a good team," Lopetegui told reporters.

"Israel are a strong team and it doesn't surprise me that they can scare any team.

"We overcame Israel because we have done things well, not because of any demerit on their part. They are a great team."

David Silva, Diego Costa, Isco and Vitolo scored the goals for Spain, but it is the latter who is making the biggest impact in Spain's campaign in terms of goals.

The Sevilla winger had not scored an international goal before the current World Cup qualifiers, but he is leading the way for them now, with his effort on Friday his fourth in five matches and he is grateful to Lopetegui for the trust he is showing him.

"I only have words of thanks for Lopetegui," Vitolo said. "He always gave me the most important thing; trust and affection."

4 goals in 5 games for @VitoloMachinpic.twitter.com/VcQ7SNgBid