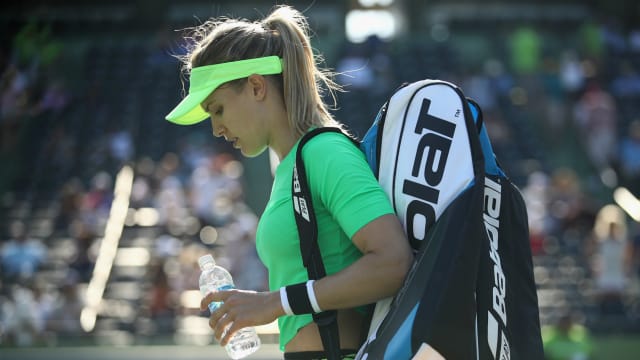 A grand-slam finalist and an Olympic Games gold medallist were sent packing from the Miami Open after Eugenie Bouchard and Monica Puig lost in the first round on Wednesday.

Canadian star and 2014 Wimbledon runner-up Bouchard went down in three sets to Ashleigh Barty at the WTA Premier tournament.

Rio 2016 champion Puig fell at the first hurdle, swept aside by Sorana Cirstea in straight sets in Miami.

Former world number one Jelena Jankovic also crashed out, while Heather Watson failed to reach the second round.

Bouchard has struggled for form and consistency since bursting onto the scene in 2014, when she featured in the semi-finals at the Australian and French Opens.

She is now 5-6 in 2017, having suffered first-up exits in Acapulco, Indian Wells and now Miami.

Puig's Miami Open did not go according to play, upstaged by Cirstea 6-2 6-4.

The Puerto Rican struggled to find her rhythm as she tallied 30 unforced errors in the first-round defeat.

Jankovic - runner-up in 2008 - was a point away from booking her spot in the second round but the Serbian was unable to capitalise.

Elsewhere, Lucie Safarova, Bethanie Mattek-Sands and Madison Brengle were among the players to advance.