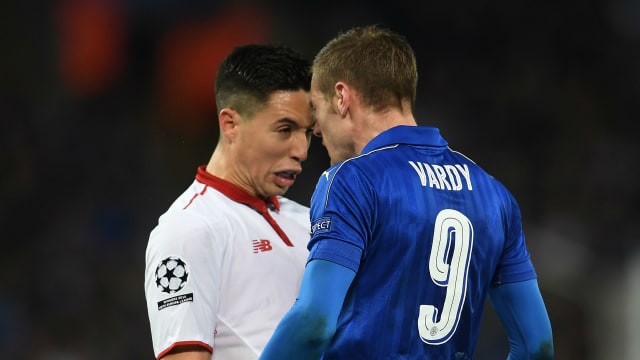 Leicester City boss Craig Shakespeare has leapt to the defence of Jamie Vardy after Samir Nasri labelled the England international a cheat.

Nasri's outburst came after he was dismissed following an off-the-ball incident with Vardy during Leicester's 2-0 Champions League win on Tuesday, which sent the Foxes through to the last eight with a 3-2 aggregate triumph.

Having moved his head towards the England forward, Nasri was dismayed to see his opponent fall back as if he had been firmly struck, leading the former Arsenal star to question his integrity.

Shakespeare has come out in defence of Vardy, though, insisting Nasri's comments could not be further from the truth.

"Jamie's not a cheat," said Shakespeare ahead of Leicester's Premier League trip to West Ham. "Never has been and never will be.

Vardy was on Thursday named in Gareth Southgate's squad for England's friendly with Germany and World Cup qualifier against Lithuania.