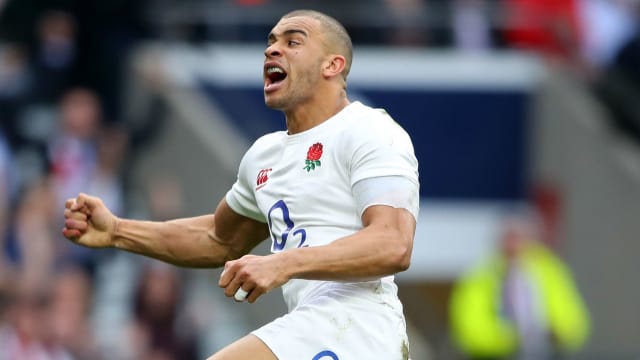 England secured the Six Nations title and matched New Zealand's record of 18 consecutive Test wins with a dazzling 61-21 thrashing of Scotland at Twickenham on Saturday.

Ireland's defeat against Wales on Friday meant the door to a second successive crown was left open and Eddie Jones' side burst through it, Jonathan Joseph scoring three of their seven tries in a resounding Calcutta Cup success.

Joseph - recalled after being left out against Italy last time out - scored two excellent first-half tries and set up Anthony Watson for a third as England took a 30-7 lead into the interval.

Watson was on the field as a replacement for Elliot Daly, who sustained a head injury in a dangerous tip-tackle from Fraser Brown as early as the second minute - the hooker perhaps fortunate to only see yellow.

Scotland's nightmare first half saw star full-back Stuart Hogg suffer a head injury before his replacement Mark Bennett twisted his knee and had to be taken from the field on a stretcher.

Gordon Reid's try and Huw Jones' brace were rare bright spots for Scotland but the day belonged to England, Joseph completing his treble early in the second period before Billy Vunipola marked his return from a knee injury with a try.

Danny Care scored twice late on while Owen Farrell, a doubt to start after suffering a leg injury in training, kicked 26 points in an imperious display and England will head to Ireland next week in search of a record-breaking 19th straight win and a second consecutive Grand Slam.

The tone was set early on following Brown's ill-discipline as Joseph burst past Alex Dunbar and raced clear to score, Farrell adding the extras before kicking three more as Scotland transgressed again.

Another Farrell penalty made it 13-0 by the quarter-hour and, after Hogg and Bennett departed injured, Joseph raced through for his second on the end of another slick England move in the 25th minute.

But, just when it seemed Scotland were wobbling, they got themselves on the board shortly afterwards as Reid barged over from close range.

However, Farrell added three more and then another fine move involving Joseph and Watson culminated in the latter surging over.

England picked up where they left off early in the second half as Joseph walked in for his hat-trick but Scotland gave their travelling fans something to cheer with Jones' two scores - either side of Vunipola crashing over at the back of a rolling maul.

Care darted over for a trademark score with eight minutes remaining and the scrum-half had a second with the last move of the game after relentless pressure at the line, and Farrell added the extras with the final act with England's celebrations soon to give way to thoughts of Grand-Slam glory in Dublin next week.

CHAMPIONS
It's FT at Twickenham and England have beaten Scotland to win the 2017 RBS 6 Nations pic.twitter.com/BElRBtBAf0