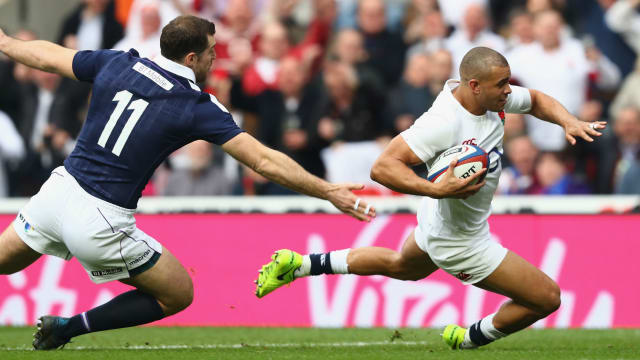 Man of the match Joseph touched down the first of his three tries inside three minutes, setting Eddie Jones' side on the path to a 61-21 win - a world-record equalling 18th successive Test victory.

England had to come from behind to win each of their previous three matches in the competition, and the Bath centre was elated to see their hard work pay off with a Calcutta Cup triumph.

"It was more what we built up in the week, we focused on starting each session very well and we did that and we saw that out there today," Joseph told ITV.

"Our set-piece was unbelievable and what us backs could do off the back of that was good too. We're very proud, very happy and look forward to next week.

"It's been great, the boys performed extremely well. We've had a great two weeks of preparation. The boys were very confident and we've put in a great performance today.

"Credit to the boys, I just run the lines outside what they created and the holes were there for me. The boys set the platform for us."

11 - @EnglandRugby's Jonathan Joseph has scored 11 Test tries since the beginning of 2016, more than any other Tier One player. Update. pic.twitter.com/KREvAfUiYZ

England can break New Zealand's tier-one world record with a 19th successive victory and wrap up a second straight Grand Slam by beating Ireland in Dublin next week.

Joseph said: "It's going to be a great challenge. We're very excited. We'll build slowly, but something we can't wait to go and try and do."