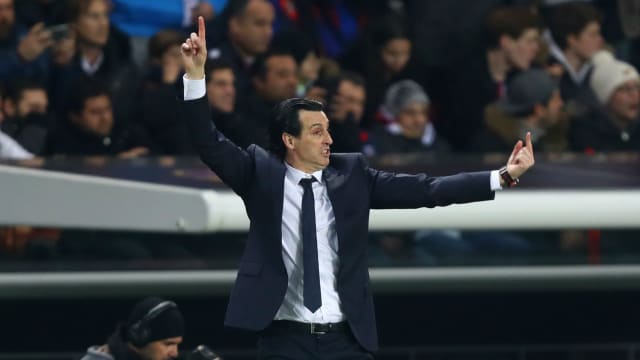 Unai Emery says he is ready to put the lessons learned from Paris Saint-Germain's Champions League embarrassment against Barcelona into practice thanks to the backing of club president Nasser Al-Khelaifi.

A Neymar-inspired Barca side thrashed PSG 6-1 at Camp Nou on Wednesday to overturn a 4-0 first-leg deficit and reach the quarter-finals.

Emery's continental pedigree - having led Sevilla to three Europa League crowns in a row - was key to his appointment in Paris, but four consecutive quarter-final exits with this damaging departure leaves PSG without a statement in Europe since their billionaire Qatari owners took over in 2011.

Nevertheless, Al-Khelaifi offered Emery his full backing on Saturday, with attentions now turning to chasing down Monaco and Nice in the race for a fifth Ligue 1 title in as many years.

"I speak with the president in good and bad times, to improve the project. As a coach, I say what I see," Emery told a news conference ahead of Sunday's trip to Lorient, bottom of Ligue 1

"After this difficult time in Barcelona, we talked to overcome this moment, to analyse, to understand what we have done wrong.

"The project will continue. I feel the president's confidence. We talk about everything together.

"We debated a lot. It is not 'yes, yes', there is debate. We do not necessarily agree. But it makes for better decisions."

It was suggested to Emery that his side may benefit from taking out captain Thiago Silva, who failed to hold together a rickety defence in the face of Barca's onslaught, but the Spaniard shot down any individual blame.

"I do not put forward a player when we win, when we lose even less," he said. "We're together, we're the same team, the same group.

"An important coach with whom I spoke after the game told me that Barcelona was used to handling difficult times. We have to learn. PSG is a great club, with a great project, but it must learn with negative experiences. This experience will serve. We did not have the personality we needed.

"We will learn for the future. That is our goal. You have to work, be demanding, be consistent.

"There will be things to maintain, others to improve. I talked about it with the chairman.

"PSG needs more respect in Europe. It has a lot, but we need more. Many things were not normal on Wednesday. I think it's clear, no need to say more."