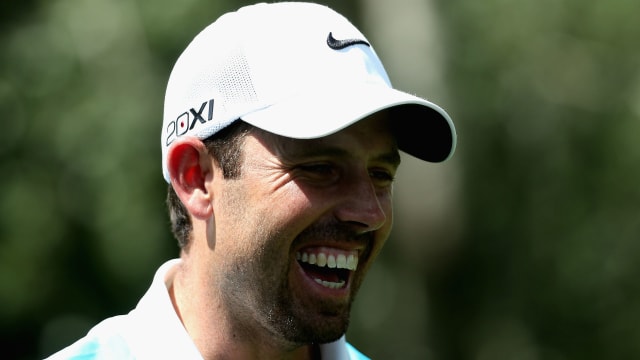 Charl Schwartzel's participation in the Valspar Championship could be threatened by the wrist injury he suffered when he was hit by a ball in Tuesday's pro-am, but the South African revealed things could have been much worse.

Schwartzel was forced to leave the course after 10 holes of the pro-am event, having been hurt at the beginning of his round when a ball from one of his amateur playing partners hit a tree and ricocheted into the South African's left arm.

Although the 32-year-old has a sore wrist as a result, he was able to laugh as he told reporters where the ball was headed before he instinctively stuck out his arm in an act of self-preservation.

"It hit the tree and it came bouncing back at some speed. It was going for my private parts and I just did a little stop there," said Schwartzel, while showing reporters how he blocked the ball with his wrist.

"I'm just happy... I think I got it better than what I would have if it wasn't for my reflexes."

Charl Schwartzel hopes his wrist is better today after being hit by an errant shot in the @ValsparChamp pro-am. pic.twitter.com/2fTKmNFQvy

Providing further details of the incident, Schwartzel added: "I've played golf for 28 years now and I've never been hit by a golf ball until this morning. It was really bad luck.

"My whole hand went numb and I stopped after 10 holes. I tried to play but I couldn't even hold the club any more.

"I've iced it and taken painkillers and anti-inflammatories. We've tested it and at least the nerve is good, it's just muscle, just swollen, I can't move the wrist properly. I'll just keep icing it. He [the amateur player] feels very bad, but it's not his fault."