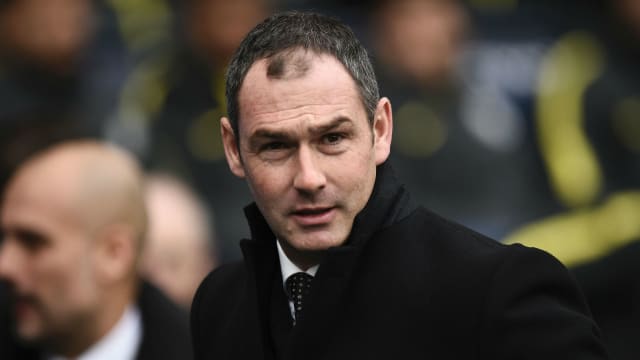 Paul Clement insists Swansea City's goal is still to finish 17th in the Premier League despite their improved form building a five-point cushion above the relegation zone.

But Swansea boss Clement is not getting carried away ahead of a vital trip to Hull City in the Premier League on Saturday.

"Our target is to finish 17th or above, nothing more than that," Clement told a pre-match news conference. "It's still very close at the bottom. At any time the gaps can change, both for us and against us.

"Our focus, as it has been all along, is very much game to game, and that's the way it will stay right through until the end of the season. We had a very important victory against Burnley last weekend, when we responded very well to losing at Chelsea. Now we face Hull in what is clearly a very important game for both teams. We have a little advantage in the table over Hull at the moment, but it's not much.

"When you look at their statistics and ours - possession, shots, shots on target, crosses - the two teams are very similar, and I expect a very good game of football."

We will go there trying to win the game. But if we can't win, it's very important not to lose because of the gap between us and them pic.twitter.com/QMhbhfUhG8

Hull have beaten Swansea in the Premier League and FA Cup this season and Clement is impressed with the impact made by Marco Silva, whose side are unbeaten in six home games in all competitions.

"I think Marco has done a very good job at Hull. They are a well-organised side and he has them playing good football," Clement said. "They lost at Leicester last weekend, but they probably played them at a bad time compared to when we did a few weeks ago.

"I watched their games against Arsenal and Chelsea and, although they lost them both, I though they did well in both. They had the edge over us in the cup - although it was a very tight game - but we are looking forward to coming up against them again."

The race is on! pic.twitter.com/Ip24yNh9ie

Ki Sung-yueng and Jefferson Montero are both injury doubts for the game, with Clement hoping the pair will be available after returning to training.

"I will leave it until as late as possible to decide whether they will be involved," the Englishman said. "Having lost Nathan Dyer, it's very good that Montero is coming back at this time. He is a player who can really make things happen on his day."