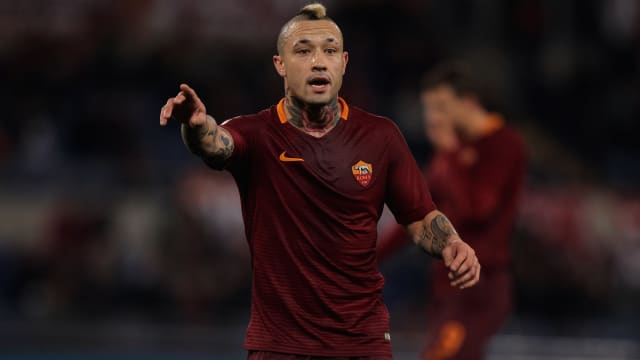 Roma midfielder Radja Nainggolan has left the door open to a possible move, but insists he is happy at the Serie A giants.

The Belgium international, 28, has been heavily linked with a switch to Premier League leaders Chelsea in recent months.

While he is happy at Roma, Nainggolan, who is contracted until 2020, was unwilling to rule out possibly leaving.

"We have just passed the first half of the season and you are talking to me about the transfer market already?" he said ahead of Thursday's Europa League clash against Lyon.

"I think I am doing well as I have always tried to do. Then this [contract extension] is a thing that we have to review in the future.

"Here I am happy, I like to play for this club, but these are things that we will see later on."

A bit of training before the training! #ASRoma#UELpic.twitter.com/z5Vujvd6rm

Roma have suffered three losses in their past four games in all competitions, including a 2-1 Serie A defeat at home to Napoli last time out.

However, Nainggolan feels his team were still on track for a potential Serie A, Coppa Italia and Europa League treble.

"It's difficult to answer whether we have received too much criticism of late. I am a footballer and when things don't go well, some criticism is normal in the end," he said.

"We have lost only two games though and nothing is lost. We can overturn the deficit in the cup [2-0 down against Lazio] and in the league we are currently occupying the same position [second] as before the game against Napoli.

"At the moment, we are still enjoying a good season and we are still on course to win every competition we are playing in.

"Obviously, defeats hurt but it's now up to us that we can do better and that we can perform better than the last two outings."