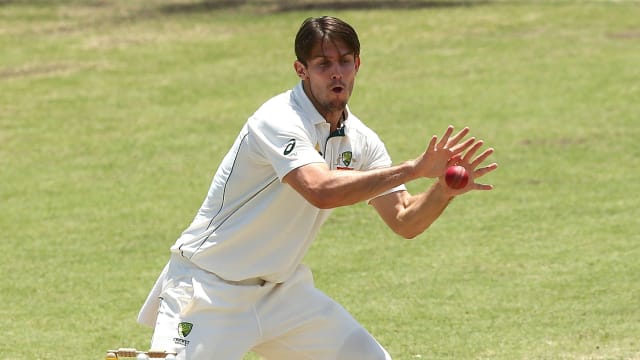 Mitchell Marsh has been ruled out of the remainder of Australia's tour of India after suffering a recurrence of a shoulder injury.

The all-rounder did not bowl at all in the first Test and has scored just 48 runs in four innings during the first two Tests, with India having levelled the four-match series at 1-1 with a 75-run victory in the second contest on Tuesday.

Marsh was included in the travelling party despite having missed January's one-day series against Pakistan through injury, but will now return home.

"Mitchell has been playing with a shoulder injury for most of the summer, which we have been managing up until now, but unfortunately it has progressively deteriorated to a point where he is unable to function at the level required," said Australia physiotherapist David Beakley.

"Consequently he will return to Australia to consult with specialists to advise the best course of action."

Marsh was only able to bowl five overs during the series, all in the second Test in Bangalore, and coach Darren Lehmann is now weighing up who to draft into the team for the third match in Ranchi.

"It was fine when he got here but it's gotten worse," Lehmann said.

"I was confident [he was fit], I thought he played really well in the second innings in Pune where he got 31.

"At the end of the day it's unlucky for Mitch and we move to whoever the next person who comes in.

"Whether we go with Usman Khawaja or Glenn Maxwell or whoever's selected, we'll just wait and see."

Australia are set to draft in a like-for-like replacement into the squad with the likes of Moises Henriques, Hilton Cartwright and Marcus Stoinis in contention.