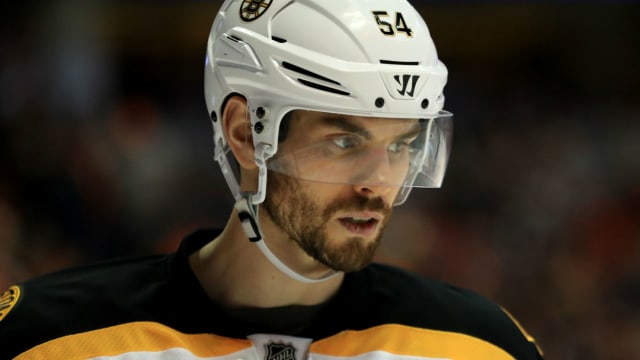 It has been said once or twice: Hockey players are tough.

In the latest case study, Boston Bruins defenseman Adam McQuaid does not plan to miss a game after the skate of team-mate David Backes sliced his neck during Saturday's NHL contest against the New Jersey Devils.

McQuaid required 25 stitches to seal the wound. The 30-year-old said he had been cleared to play against the Ottawa Senators on Monday, and he expects to be in the line-up.

"Initially, it's a bit of a panic, but when you don't see blood spraying, I guess you think you're all right," McQuaid told reporters Sunday sporting stitches that stretch halfway across the right side of his neck.

"It was definitely a really close call and I can't help but thank God that it wasn't a scarier situation than it could have been."

The incident happened late in the third period when Backes was upended along the boards and his left skate caught McQuaid.

McQuaid dropped his stick and glove, but with the Bruins preserving a 3-2 lead, he kept skating and finished his shift.

"Initially, when I didn't see any blood, I figured that I was OK," he said. "They didn't blow the whistle, and [play] was still going on in an obviously important part of the game. I was pretty helpless without my stick, but I was just trying to be a body getting in the way.

McQuaid was taken to the Bruins' locker room, where he received the stitches.

The eight-year NHL veteran has dealt with a number of significant injuries through his career, including a concussion that cost him a month last season.

He did not practice on Sunday, but said he is contemplating wearing protective gear on his neck in Ottawa to cover the stitches.

"He's a tough customer, and I'm not telling you something you don't already know," Bruce Cassidy, the Bruins' interim coach, said. "That's a scary injury. He even stayed on the ice, so I'm not even sure he knew what was going on. But it was scary. He got lucky. "Even though it was an unlucky situation, he got lucky in the big picture. Hopefully it doesn't affect him going forward."