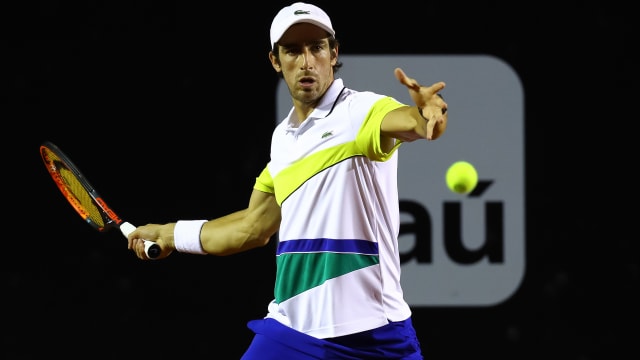 Pablo Cuevas must come from a set down to win a third straight Brasil Open title after his final against Albert Ramos-Vinolas was pushed back to a Monday finish due to rain.

Ramos-Vinolas was serving at deuce at 3-3 in the second set when the weather intervened.

After a delay of several hours, organisers pushed back the finish to Monday.

Neither player was able to break serve in the first set, although Cuevas had set points in the 10th and 12th games.

His misses would prove costly as Ramos-Vinolas, the second seed from Spain, won four straight points from 2-2 in the tie-break.

Cuevas broke for 2-1 in the second set but handed that advantage back in the sixth game.

The @BrasilOpenTenis final will resume at 12:00pm local time Monday after rain halted play in the second set. Read: https://t.co/cdd0UwmXWhpic.twitter.com/Y4MQc8brYT