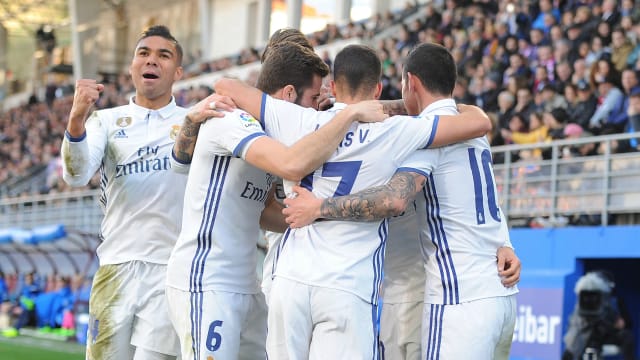 Casemiro believes Real Madrid's rapid start at Ipurua on Saturday was crucial to sealing a 4-1 win over Eibar that sent the team top of LaLiga.

With Madrid without Cristiano Ronaldo and Gareth Bale due to injury and suspension respectively, Karim Benzema struck twice in the first 25 minutes to get Zinedine Zidane's men up and running.

James Rodriguez soon added a third, with Marco Asensio adding further gloss to the scoreline in the second half before Ruben Pena scored a consolation for the hosts, with Casemiro pleased Madrid bounced back from taking four points from their previous three Liga games.

"It isn't going to drive us crazy, we only had three normal [poor] games, it wasn't the whole season," Casemiro told beIN SPORTS. "We also had a great game against Napoli [in the Champions League], we continue being strong.

"[Today] we had one of our more complete games, we came out very well and were switched on, if you start like this then with our quality it is impossible to lose.

"Football is like this, you can change things quickly and that's what we've done. Real Madrid are still strong and concentrating on all competitions."

Our fight for LaLiga continued with points at Ipurua!

James dismissed speculation Zidane had faced criticism from his players in the build-up to the game, with Madrid looking forward to Tuesday's second leg against Napoli.

"I am happy, I always want to help the team to win and we have done well [against Eibar]," the Colombia international said. "It's not about ourselves as individuals, but as a group.

"If the headlines are positive, the team plays well. I'm not going to say anything about [team meetings], we're still united as we always were. There's a healthy atmosphere around the squad and we want to keep it that way - 4-1 was a fair scoreline and it gives us confidence for everything that is to come this season.

"[Napoli] have an impressive stadium but if we concentrate and go in with a lot of intensity, then we'll be on the right track."